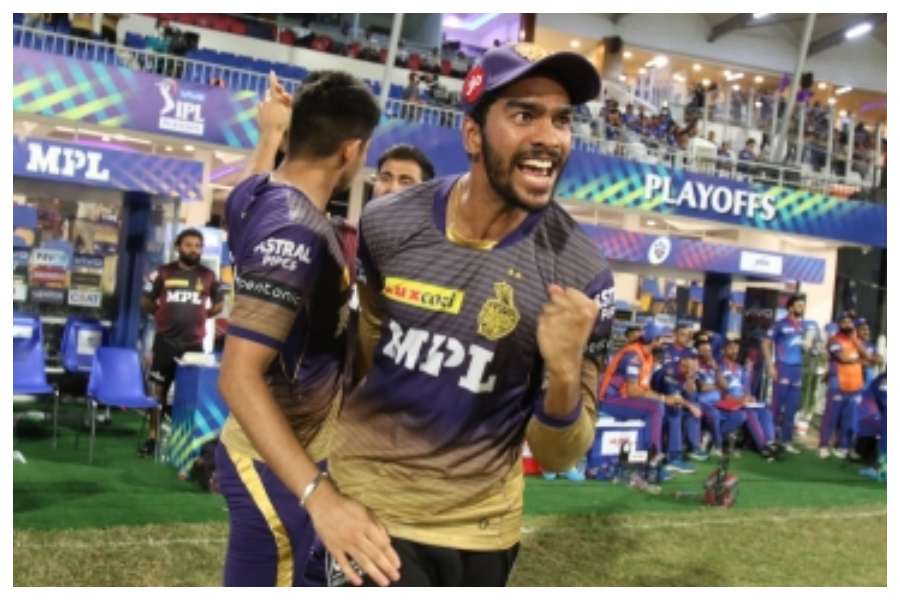 Riding on a brilliant fifty by Venkatesh Iyer (55 off 41), Kolkata Knight Riders overcome a dramatic collapse to beat Delhi Capitals by 3 wickets in a low-scoring Qualifier 2 of the IPL 2021 at the Sharjah Cricket Stadium, here on Wednesday.

KKR will now face the MS Dhoni-led Chennai Super Kings in the summit clash, which is scheduled to be played at Dubai International Stadium on Friday. This is KKR’s first final since 2014.

Chasing a total of 136 runs for victory, openers Iyer and Shubman Gill gave Kolkata a solid start. The duo mixed caution with aggression and took KKR to 51/0 after 6 overs. Even after the powerplay, both the openers continued in the same vein, taking KKR to 76/0 in 10 overs.

Kagiso Rabada, finally gave Capitals a breakthrough as he dismissed Iyer. The youngster played a quickfire knock of 55 runs in 41 balls and stitched a 96-run opening stand with Gill. After Iyer’s wicket, Nitish Rana joined Shubman Gill in the middle. But Rana couldn’t do much and got out to Anrich Nortje after scoring 13 runs. In the next over, Gill also got out and things took a dramatic turn as KKR collapsed from 125 for 2 to 130 for 7.

But Rahul Tripathi held his nerve to hit a sixer and finish the game for KKR when six runs were required off 2 balls in the final over.

Earlier in the day, openers Prithvi Shaw and Shikhar Dhawan gave Delhi Capitals a solid start, scoring 32/0 after 4 overs. However, Kolkata bounced back with the wicket of Shaw (18), who was dismissed by Varun.

After Prithvi’s wicket, Dhawan and Marcus Stoinis joined forces and looked to maintain the run-flow. But KKR bowlers didn’t allow them to score freely by bowling hard length deliveries. As a result, Delhi were 65/1 at the halfway mark, lurching towards the average total.

The pressure was building on Stoinis, who was promoted in the batting order despite coming from an injury. In order to score freely, the all-rounder gave himself room to hit one through the off side but missed a quick and cross-seamed delivery, which crashed into the stumps. Stoinis (18) and Dhawan added 39-runs for the 2nd wicket partnership.

From there on, Kolkata continued to strangle the batters further and Delhi kept on losing wickets at regular intervals. Dhawan, who scored 36 off 39, was the first to go. He charged down the track, trying to slam Chakaravarthy’s delivery straight down the ground but the ball took the outside edge and Shakib did well to cover ground quickly and take a diving catch.

DC skipper Pant came to bat next and started his innings with a boundary. But he couldn’t carry his knock longer and got out to Lockie Ferguson, leaving DC in trouble at 90/4 after 15.2 overs.

After losing the wickets of Dhawan and Pant in quick succession, Delhi were in deep trouble and Shreyas Iyer and Shimron Hetmyer had the responsibility to bring their team back in the game. Hetmyer survived a close call on the individual score of 3 as he was caught brilliantly by Shubman Gill at long on off a Varun Chakravarthy delivery but it was called a no ball by the TV umpire.

After getting the life-line, the Windies cricketer hit a couple of sixes in the 18th over bowled by Ferguson. However, in the next over, Hetmyer (17) got run out. Iyer wanted to squeeze out a run but Venkatesh Iyer did well to throw the ball back on time to Dinesh Karthik and Hetmyer was well short of the crease.

In the end, Shreyas Iyer hit a six and four in the last over of the innings and took Delhi Capitals to a total of 135/5 in 20 overs, which was not enough.

Related Tags:Venkatesh Iyer
Up Next

IPL 2021: I don’t have words to express at the moment, says Pant after close loss

Joint opposition candidate for Presidential poll, Yashwant Sinha on Friday said the nation needs a president who can protect the Constitution of the country.

Sinha was in Gujarat to seek support for himself. He appealed to the MLAs and MPs to vote for the candidate “who can protect the Constituency of India”.

He said the nation was passing through a serious constitutional and economic crises and at such a point of time the nation needs a president who does not toe the party line at the cost of national interest.

“There is an undeclared emergency in the country, even the media does not have the liberty to practice the profession freely when a check and balance is must for the country. So MLAs and MPs should vote in accordance with their conscience,” said sinha.

The former minister said he was confident of getting votes of the MLAs and MPs belonging to the Congress, BTP and NCP in the state.

He said he disagreed with the political theory that if a person is from a specific community and one holds a constitutional post it helps in uplifting the community. Citing the example of NDA presidential candidate Draupadi Murmu, he said,”They are projecting her as a tribal representative, she was the Governor of Jharkhand for six year, yet tribals’ conditions have not improved.”

“Though Ram Nath Kovind was president, see the condition of the community in his state. Nothing has changed, on the contrary they have suffered a lot,” said Sinha.

He, however, made it clear that he did not mean that a person should confront the central government.

He said, “Communalism is spreading because the state is backing it because communalism is consolidating the vote bank for them.”

Sinha said he was shocked to find that even today section 144 is implemented in Gujarat and questioned the state who it was afraid of. He said, “Even for social functions or events the people of Gujarat are asked to seek permission which is anti democracy.”

I have seen glimpses of what this hockey team can achieve: Women’s coach Schopman

India women’s hockey team chief coach Janneke Schopman has said she has “seen glimpses” of what her players can achieve following her side’s 3-4 loss in a hard-fought Pool B match of the FIH World Cup 2022 against New Zealand here late on Thursday.

Despite going down to the Kiwis, India are still in contention for a quarterfinal spot after finishing third in their pool. They will face Spain, who finished second in Pool C, in the crossover match on July 10 for a place in the last-eight.

Schopman also attributed the loss to New Zealand to defensive frailties and the rivals’ clinical finishes.

“I am proud of our fight as we worked really hard to stay in the game. Unfortunately, we made some defensive mistakes and New Zealand were very clinical in their finish,” said Schopman.

“There are a lot of things to learn from this game but I have seen glimpses of what we can do. Especially, our performance in the second half showed that we can play some good hockey,” she added.

For India, Vandana Katariya (4th munite), Lalremsiami (44th) and Gurjit Kaur (59th) were on target. The Indian team started the game aggressively and put pressure on their opponents in the opening minutes of the match.

But the Kiwis fought back after they earned a penalty corner and Olivia Merry didn’t miss out on the opportunity of slotting the ball into the goal in the 12th minute.