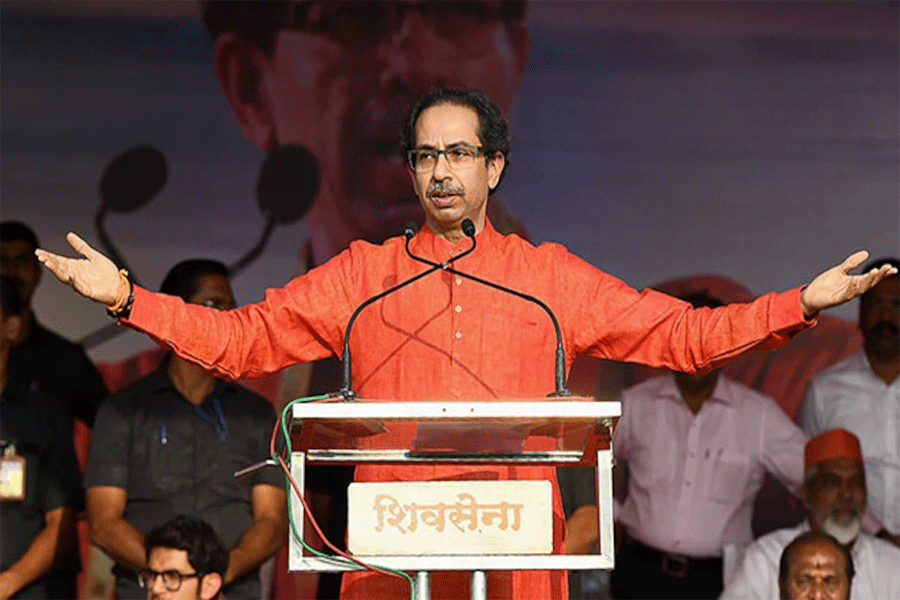 The Uddhav Thackeray-led Shiv Sena had been insisting that his party, and not the one led by Eknath Shinde, should get permission to hold the rally at Mumbai’s Shivaji Park in line with the Sena’s 56-year-old tradition
Former chief minister Uddhav Thackeray was keen to hold its annual Dussehra rally at Shivaji Park which was expected to be a show of strength (HT File Photo/Satish Bate)
The Brihanmumbai Municipal Corporation(BMC) has denied permission to both Uddhav Thackeray and chief minister Eknath Shinde-led factions, to conduct its annual Dussehra rally at Shivaji Park in Dadar west on October 5, citing the local police report that allowing either of the two rival factions could lead to law and order situation.“The police refused NOC (no objection certificate) as there could be a law and order problem and there could be a clash between two factions,” Ramakant Biradar, deputy municipal commissioner, Zone 2 said, citing the report received from the local police station.

“That’s why the civic body denied permissions… due to denial of NOC from the police,” he said.

“In the morning, there were arguments in court and the Thackeray faction said that they will submit an amended affidavit. The hearing was adjourned for tomorrow,” said Biradar.

In its letter to rebel Shiv Sena MLA Sada Sarvankar, BMC said that it has also received a request for permission from Anil Desai of the Uddhav Thackeray faction.Citing a police report dated September 21, BMC told Sarvankar that it will not be possible to give a nod to only one camp as it could disrupt the peaceful environment at Shivaji Park.

BMC officials said they were in a dilemma on the requests received from the two factions and had even sought an opinion from the legal department.

“But the police report resolved this issue. And now the court will decide the further course of action,” one BMC official.

To be sure, the ruling Eknath Shinde camp of the Shiv Sena already has secured approval to hold its event at the Bandra Kurla Complex (BKC) grounds, apparently as a backup plan.

The Uddhav Thackeray faction was particularly keen to hold its annual Dussehra rally that has been the venue for the event in previous years to demonstrate that it was the “real” Sena. At an event to launch his party’s BMC poll campaign, Uddhav Thackeray underlined that the October 5th Dussehra rally would be held at Shivaji park at all costs. The Shiv Sena has had a strong emotional link with Shivaji Park. It was born at the Ranade Road residence of party founder Bal Thackeray located nearby on June 19, 1966 and held its first public meeting at the grounds on Dussehra day in October that year, marking the beginning of this convention.

Bal Thackeray’s father, the social reformer and activist ‘Prabodhankar’ Keshav Sitaram Thackeray was among those who launched the public celebrations of the festival of Navratri, which culminates with Dussehra. It was also at a Dussehra rally back in 2010 that Uddhav Thackeray’s elder son Aaditya was launched in politics as the head of the Yuva Sena. Addressing the media at the MHADA Colony in Bandra east, Parab said the structure was demolished by the society members on Monday after MHADA last week refused permission to regularise it.

Dismissing Somaiya’s claims, he hit back to accuse the BJP leader of “working against the interests of the poor Marathi people” especially since the MHDA complex is now going for a redevelopment.

“By targeting me like this, Somaiya – who has taken a ‘supari’ (contract) from the builders – will try to misuse the notice and pressurize the society members here against asking for additional area (of the flats) in the redevelopment project,” claimed Parab.

Along with some society members, Parab emphatically said that after the MHADA declined permission to regularise the office due to Somaiya’s coercion, the society on its own flattened the office.

Somaiya – who first raised the issue before the Lokayukta in September 2021 – claimed that the MHADA brought the axe on Parab’s “illegal office”, which the Society and the Sena (UBT) leader rejected.

Parab, who was a minister then, said that he had informed MHADA of having nothing to do with the land or the structure or the demolition orders then, and Somaiya’s false allegations were intended to discredit him.

The society members said that they had asked Parab to base his office here for the benefit of the people in the MHADA complex to which he had agreed.

“Fake news is being spread on this issue. I challenge Somaiya to come and view the demolished office and we shall give him a proper areception’,” declared Parab.

As Somaiya drove to the venue, Mumbai Police stopped his vehicle near Bandra Kurla Complex ostensibly to prevent any law and order issue.

Mumbai: Maharashtra Chief Minister Eknath Shinde on Monday called a special meeting of all the MPs of Maharashtra at Sahyadri guest house in Mumbai for discussions ahead of the Union Budget.

Sena [UBT], Congress MPs amiss from the do

Meanwhile, the Sena MPs from the Uddhav Thackeray faction, as well as those of the Congress skipped the Union Budget discussion called for by CM Eknath Shinde.

Discussion on development needed in Maharashtra

Discussions at the meeting centered on the kind of development that is needed more in Maharashtra, and the type of development projects that need to be implemented, and the kind of schemes that are lacking presently.
The MPs put forward their suggestions and opinions on various issues, ranging from a flyover bridge or a dam to be built on a river to a medical college or other such things.

BJP MP Dhananjaya Mahadik said, “The Uddhav Thackeray group and Congress MPs did not come to the meeting as they are not concerned about the state.” Mahadik said all the MPs were allowed to raise issues pertaining to their respective constituencies at the meeting.