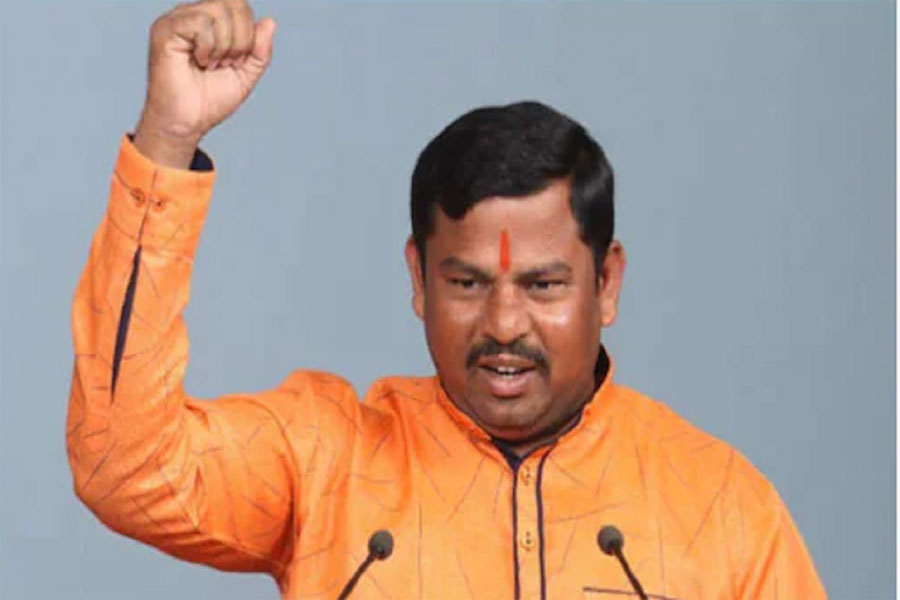 Police took the MLA into custody from his residence in Mangalhat amid tight security and continuing protests for his re-arrest for allegedly making derogatory comments about Prophet Muhammad.

Raja Singh, who has been arrested for second time in three days, was later shifted to Cherlapally Jail on the city outskirts.

The police announced that it has invoked PD Act against Raja Singh, a rowdy sheeter of Mangalhat Police Station, on the orders of Hyderabad Police Commissioner C.V. Anand.

According to the police, Raja Singh has been habitually delivering provocative and inflammatory speeches and driving a wedge between communities leading to public disorder.

A total of 101 criminal cases registered against him since 2004. He was involved in 18 communal offences in the limits of different police stations in Hyderabad.

Raja Singh on August 22 posted online an offensive video against Prophet Mohammad with an intention to provoke all sections of people and thereby cause breach of peace and public tranquility, said the police statement.

When he was being taken into custody from his residence on August 23, Raja Singh stated that police are making efforts to remove his video from YouTube but that will not deter him from posting his further speeches and videos on this issue.

“Any venomous hate speech has the potential of provoking individuals to commit acts of riot, indiscriminate violence, terrorism etc. Offensive speech has real and devastating effects on people’s lives and risks their health and safety and severely affects fraternity, dignity of individuals, unity and national integration and also offends the fundamental rights guaranteed under Articles 19 and 21 of the Constitution of India,” said police.

Sensing danger to the life and properties in the hands of the protesters, people got panicky and closed their shops and establishments. The entire population of the city and the state went into grip of fear and shock by his activity, police said.

According to police, by his blasphemous utterances, Raja Singh has been continuously creating hatred and ill-will between major communities resulting in widespread unrest among the people in Hyderabad and the state, thereby adversely affecting the maintenance of public order.

He has been continuously causing widespread fear, unrest and panic among general public for a long period of time by committing such offences and acting in a manner prejudicial to the maintenance of public order apart from disturbing the peace, tranquility and communal harmony in the society.

A few minutes before his arrest, the MLA released a video blaming Telangana minister K.T. Rama Rao for communally tense situation in Hyderabad by allowing comedian Munawar Faruqui to perform in Hyderabad.

Raja Singh was arrested hours after issuing him noticed in two old cases.

The controversial MLA was arrested a couple of hours after police officers from Shaninayathgunj and Mangalhat police station issued the notices under Section 41-A of the Criminal Procedure Code.

Both the notices were issued in connection with the old cases.

Mangalhat police issued notice with regard to a complaint booked in February for threatening voters of Uttar Pradesh through a video which had gone viral during assembly elections in that state.

A case was registered against him on the direction of the Election Commission of India.

Shahinayathgunj police issued notice with regard to a case of making provocative speeches at Begum Bazar in April.

Following massive protests over his offensive remarks against the Prophet, the police had arrested Raja Singh on Tuesday. He, however, was granted bail by a city court the same day.

Traders in some areas downed shutters to protest against his arrest.

Additional police forces were deployed in sensitive areas to maintain law and order.