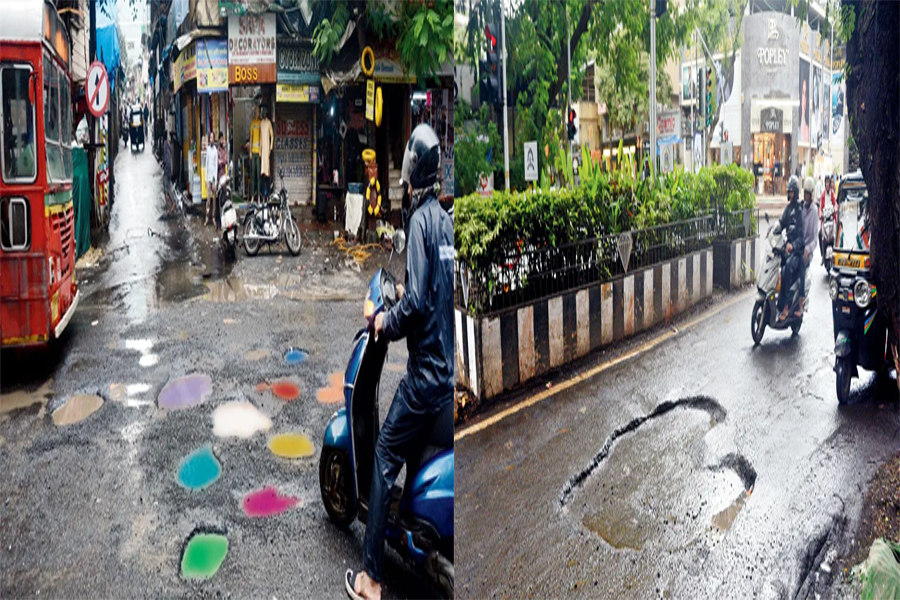 Unlike previous years, the BMC this Ganeshotsav failed to rid the roads of potholes for the last visarjan procession, which means people will have to endure the menace until the end of the monsoon. To make things worse, heavy rain over the past few days has added new craters to the city’s roads. Tired of official apathy, activists have come up with a unique protest. “We have decided to paint the potholes in Navratri hues—nine colours for nine days,” said an activist.
This year, the condition of roads is even more pathetic, with huge craters lining multiple stretches. Activists said they are tired of not getting a resolution despite repeated complaints to the BMC and posts on social media.

“Hence we have decided to protest the poor condition of roads through the celebration of the upcoming Navratri festival, by painting the potholes in Navratri hues—nine colours for nine days,” said Godfrey Pimenta, an activist.
On September 26, which is the first day of Navratri, the potholes will be painted white, followed by red the next day and so on, Pimenta said. The other colours of Navratri are royal blue, yellow, green, grey, orange, peacock green and pink.

He urged Mumbaikars to take part in the unique celebration, so that the authorities hear their protest against the deadly roads loud and clear. “Potholes and bad roads cause so many problems. People miss flights, trains, get late to schools, potholes lead to traffic jams, accidents, damage to vehicles,” said Mushtaque Ansari, an activist.

Usually, the BMC fills up potholes before the final day of Ganpati visarjan, and as the rain recedes, the authorities address the issue. However, this year, due to intermittent showers, the civic body claimed to have faced difficulty in filling up the potholes.

H ward officials recently sent people to fix potholes in Bandra West, on the complaint of Ansari. “They filled up the potholes while it was raining. Even they knew it won’t last,” said the activist.

“We asked the ward office to fix the potholes, but it needs at least two to three days of sunlight to dry the patches so it can hold the mix,” said a civic official. The BMC chief has ordered the resurfacing of the bad patches once the monsoon ends.