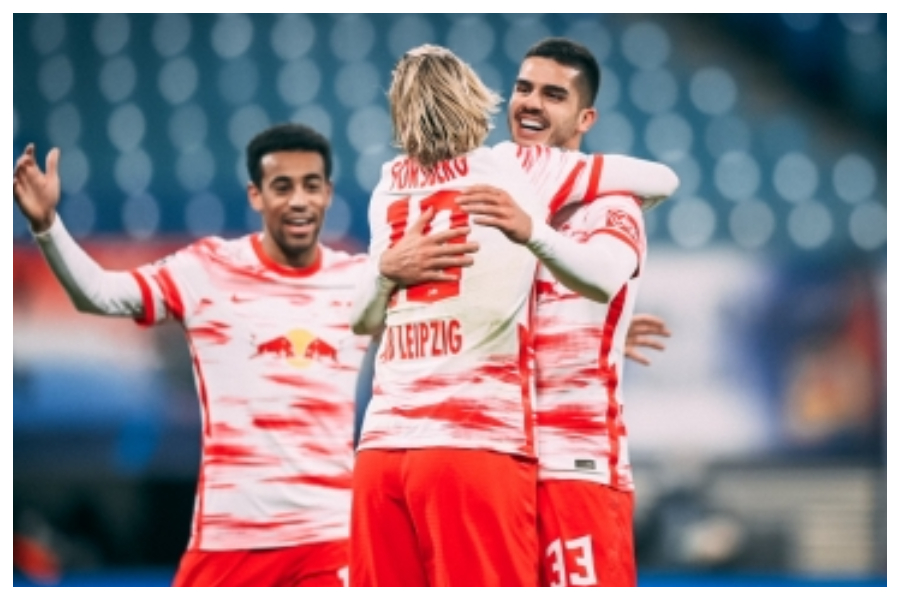 Leipzig sealed the third place in Group A and booked its berth for the Europa League after goals from Dominik Szoboszlai and Andre Silva helped the ‘Red Bulls’ edge Manchester City 2-1 in the final round of the Champions League’s group stage.

Both sides staged well-positioned defences from the kick-off hence goal-scoring opportunities were at a premium in the opening period on Tuesday night.

Leipzig’s Konrad Laimer and City’s Kevin De Bruyne produced the first half-chances before Jack Grealish pulled wide from a promising position to waste a good chance for the visitors in the 22nd minute.

The hosts showed a clinical chance conversion at the other end of the green, as Laimer’s perfectly-timed through ball was sent to Szoboszlai, who rounded goalkeeper Zackary Steffen before finishing the job into the empty goal with 24 minutes played, Xinhua reports. Leipzig almost doubled its advantage two minutes later, but Steffen was on guard and defused Emil Forsberg’s dangerous effort from 12 meters.

The hosts continued on the front foot and should have extended the lead, but Steffen was equal to Silva’s header in the 39th minute.

Manchester City sparked to life before the half time as Peter Gulacsi had to tip Phil Foden’s hammer to the post before the Leipzig goalkeeper neutralised De Bruyne’s free kick in the closing stages of the first half.

After the restart, City assumed control and dominated possession but for all that the visitors couldn’t do damage to Leipzig’s bulwark.

To make things worse for the visitors, Leipzig doubled its advantage against the flow of the game as Silva benefitted on a counterattack via Forsberg to beat Steffen with a well-placed low shot in the 71st minute.

It was a short-lived joy for the hosts though as the ‘Sky Blues’ halved the deficit after Oleksandr Zinchenko’s cross fed Riyad Mahrez, whose diving header caught Gulacsi on the wrong foot in the 77th minute.

City’s comeback hopes suffered a heavy setback in the 83rd minute when Kyle Walker was sent off with a straight red card following a rude foul play on Silva.

The visitors pushed forward despite their numerical disadvantage, but Leipzig’s defence stood firm and secured all three points on home soil.

With the result, Manchester City top Group A with 12 points whereas Leipzig finish on the third spot to continue in the Europa League.

A brace each by Marco Reus and Erling Haaland smoothed the way for Borussia Dortmund’s 5-0 victory over Besiktas at the last round of Champions League’s group stage on Tuesday. The “BVB” took the reins from the starting whistle and pressed Besiktas on the back foot.

Dortmund still needed some time to produce goal-scoring opportunities and had to wait until the 17th minute before Jude Bellingham pulled over the target from a promising position.

Besiktas posed no threat and failed to combine its ways through Dortmund’s well-positioned defence.

The hosts eventually broke the deadlock at the half hour mark when Bellingham had a lot of space following a counterattack and teed up for Donyell Malen, who slotted the ball past Besiktas goalie Ersin Destanoglu.

The visitors from Turkey had to swallow two more setbacks before the break as Welinton felled Mahmoud Dahoud inside the box. The defender received his marching orders and caused a penalty.

Reus stepped up and made no mistake to double the advantage from the spot.

Dortmund dominated the one-sided affair and made it three with eight minutes into the second half when Reus danced through Besiktas box before finishing off into the bottom left corner.

Haaland came in for Reus at the hour mark but didn’t need long to get his name on the scoreboards as the Norway international made it 4-0 after nodding home Nico Schulz pinpoint cross into the box in the 68th minute.

Haaland gained momentum and wasn’t done with the scoring as he wrapped up his brace after heading home Dahoud’s corner kick in the 81st minute.

Dortmund’s prolific striker had even the chance to clinch a hat trick but for all that Haaland couldn’t turn his two presentable chances into a tangible reward in the closing stages.

With the result, third-placed Borussia Dortmund will continue to play in the Europa League meanwhile Besiktas end its Champions League season on fourth place in Group C.