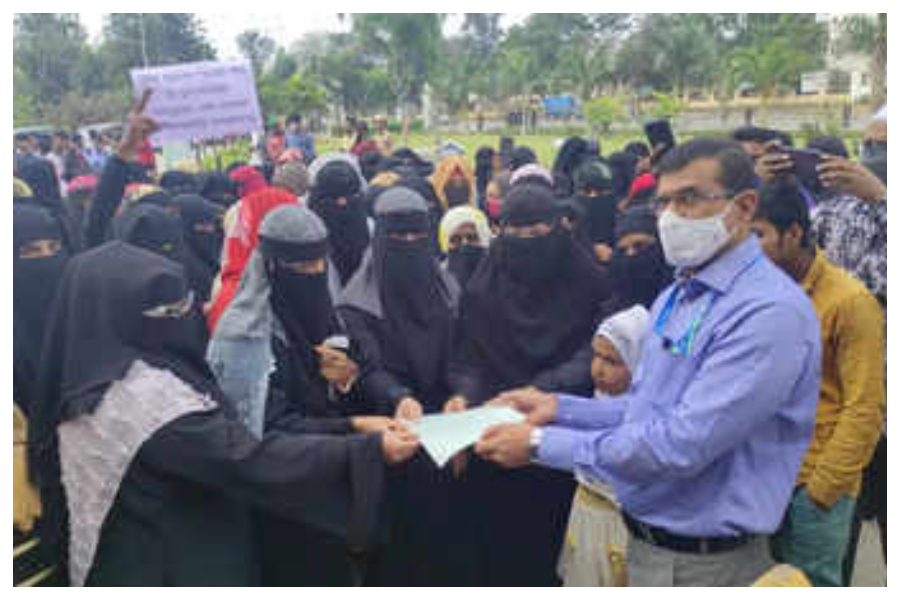 With the Karnataka hijab row snowballing into a major controversy, the protesting students, who have filed petitions in the High Court against the hijab ban in colleges, have vowed to fight until victory.

A three-judge bench of High Court will hear the matter on Thursday.

Meanwhile, Education Minister B.C. Nagesh on Thursday stated that the hijab row has been created and discussed at the international level only to denigrate the only BJP government in south India.

Shifa, one of the students of Udupi College from where the hijab row erupted, stated that even if the larger bench gives verdict against them on wearing hijab, they will continue to fight for their right. “We will fight until victory. The legal battle on wearing hijab to attend classes will be continued,” she said.

Expressing full faith on the judiciary, another student Aliya said: “We will fight for our hijab rights which are our constitutional and religious rights in case the court ruling comes against wearing hijab, she said.

Asked about them being trained and provoked by Campus Front of India (CFI), she explained that it’s not the CFI that has come to them. “After seeing their philanthropic and student friendly activities we approached them. They are supporting our struggle. They need not tell us about our rights. We are fighting for it. We don’t know why the issue is being made so big. They would have taken a simple decision at the school management level and sorted this out,” she said.

Education Minister Nagesh stated that hijab is banned in many countries and it has not become news so far. A small incident in Udupi city becomes international news and discussed at global levels. This is an international conspiracy. This conspiracy is against the state and the nation.

It is clear that there is a big conspiracy behind the hijab row. This is being done to bring disrepute and discredit to the only BJP government in south India. The government has tried to solve the issue but students have approached the court. Some elements are tolerant of the fact that everything is being run smoothly in the state by the ruling BJP government, he explained.

“The hijab is banned by Muslim countries. One particular college issue of one of the districts in the state is an international issue today. This is being done to discredit the nation. To create ill-opinion about India and a negative mindset about the country. It is a conspiracy to put blame on the ruling establishment,” Minister Nagesh said. However, no conspiracy is going to work in Karnataka, he stated.

For about a month, there were no protests in other colleges of Udupi, from where the hijab row has started. Among 12 students who have started the agitation, 6 agreed to attend classes without hijab, he stated.

Ataulla, CFI President of stated that they are helping students to get their rights. The organisation is not provoking them. He maintained that there is no link of CFI with SDPI or PFI. Along with CFI, Muslim organisations are also supporting the hijab rights for Muslim students. “Hijab row has been blown out of proportion by ruling BJP to come to power in the 2023 Assembly elections. Their aim is to polarise Hindu-Muslim votes.

The hijab row started last month with few students of Udupi Government Pre-University College wearing hijab were denied permission to attend classes. The college authorities maintain that the students who used to come without hijabs have suddenly started wearing it. The students later went on a protest refusing to attend classes without hijab. The issue became a controversy and spread to other districts snowballing into a major crisis in the state.