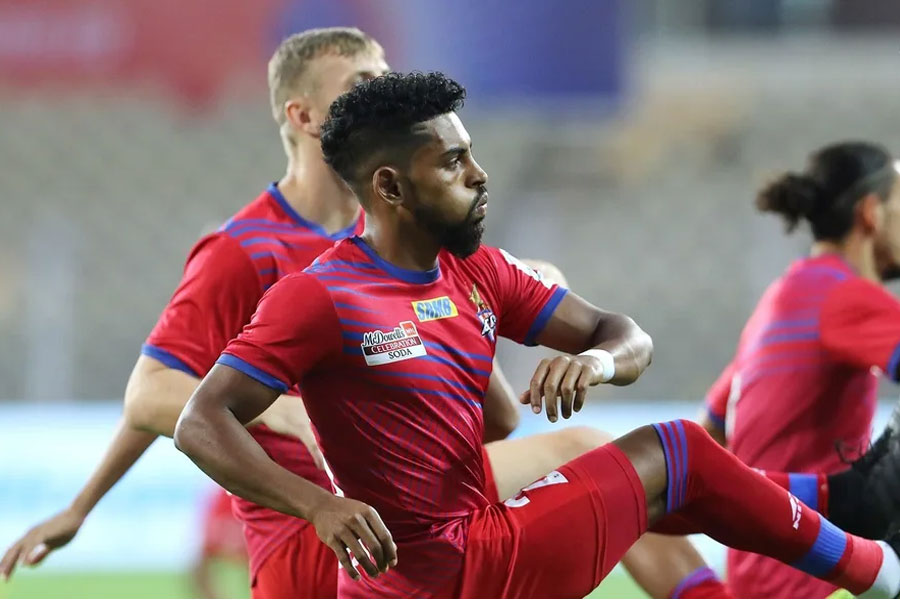 Indian Super League (ISL) side Chennaiyin FC have bolstered their attack by signing forward Kwame Karikari ahead of the upcoming season.

The Ghanaian footballer will be joining the club following an impressive outing in the Thai League for Nakhonratchasima Mazda. He scored 13 goals in 29 league matches for the Thai club last season.

Karikari was also the joint second-highest goal scorer for Mazda in the Thai FA cup with four strikes in six games.

Karikari brings in valuable experience to Chennaiyin’s attack, having played 261 games in his 11-year long professional career with 84 goals and 13 assists to his name.

The striker has plied his trade for 12 clubs in eight top-tier leagues across the world.

He also has two Europa League goals to his name, which came against CSKA Moscow and PSV Eindhoven in 2012.

Talking about the club’s third foreign signing this summer, Chennaiyin FC co-owner Vita Dani said, “I would like to welcome Kwame Karikari to the Chennaiyin family. I think he’s got the technical ability and the physicality to succeed in India. We have had many great forwards at this club and I believe Kwame should be able to match those standards.”

Karikari has spent most of his time in the Swedish league, featuring for AIK Solna, with whom he made his professional debut at 19 in 2011. He played 58 matches, including seven Europa League games, for them and scored 10 goals across competitions in five seasons.

Halmstads and Degerfors were the other Swedish clubs Karikari turned out for.

“I am very happy to join Chennaiyin FC. I cannot wait to get started with the new team and I am really looking forward to this new and exciting challenge,” said Karikari, who also represented Ghana at the U-20 Africa Cup.

It was in 2015 when Karikari made a permanent move out of Sweden and joined Turkish side, Balikesirspor. He played 40 matches for them in two seasons, registering 12 goals and five assists. Later he turned out for clubs in countries like Norway, Qatar, Georgia and Uzbekistan.

He was part of Dinamo Tabilisi’s title-winning campaign in the 2018-19 Georgian league.

Joint opposition candidate for Presidential poll, Yashwant Sinha on Friday said the nation needs a president who can protect the Constitution of the country.

Sinha was in Gujarat to seek support for himself. He appealed to the MLAs and MPs to vote for the candidate “who can protect the Constituency of India”.

He said the nation was passing through a serious constitutional and economic crises and at such a point of time the nation needs a president who does not toe the party line at the cost of national interest.

“There is an undeclared emergency in the country, even the media does not have the liberty to practice the profession freely when a check and balance is must for the country. So MLAs and MPs should vote in accordance with their conscience,” said sinha.

The former minister said he was confident of getting votes of the MLAs and MPs belonging to the Congress, BTP and NCP in the state.

He said he disagreed with the political theory that if a person is from a specific community and one holds a constitutional post it helps in uplifting the community. Citing the example of NDA presidential candidate Draupadi Murmu, he said,”They are projecting her as a tribal representative, she was the Governor of Jharkhand for six year, yet tribals’ conditions have not improved.”

“Though Ram Nath Kovind was president, see the condition of the community in his state. Nothing has changed, on the contrary they have suffered a lot,” said Sinha.

He, however, made it clear that he did not mean that a person should confront the central government.

He said, “Communalism is spreading because the state is backing it because communalism is consolidating the vote bank for them.”

Sinha said he was shocked to find that even today section 144 is implemented in Gujarat and questioned the state who it was afraid of. He said, “Even for social functions or events the people of Gujarat are asked to seek permission which is anti democracy.”

I have seen glimpses of what this hockey team can achieve: Women’s coach Schopman

India women’s hockey team chief coach Janneke Schopman has said she has “seen glimpses” of what her players can achieve following her side’s 3-4 loss in a hard-fought Pool B match of the FIH World Cup 2022 against New Zealand here late on Thursday.

Despite going down to the Kiwis, India are still in contention for a quarterfinal spot after finishing third in their pool. They will face Spain, who finished second in Pool C, in the crossover match on July 10 for a place in the last-eight.

Schopman also attributed the loss to New Zealand to defensive frailties and the rivals’ clinical finishes.

“I am proud of our fight as we worked really hard to stay in the game. Unfortunately, we made some defensive mistakes and New Zealand were very clinical in their finish,” said Schopman.

“There are a lot of things to learn from this game but I have seen glimpses of what we can do. Especially, our performance in the second half showed that we can play some good hockey,” she added.

For India, Vandana Katariya (4th munite), Lalremsiami (44th) and Gurjit Kaur (59th) were on target. The Indian team started the game aggressively and put pressure on their opponents in the opening minutes of the match.

But the Kiwis fought back after they earned a penalty corner and Olivia Merry didn’t miss out on the opportunity of slotting the ball into the goal in the 12th minute.