Afghanistan’s new Acting Prime Minister Mullah Mohammad Hassan Akhund has called on former officials who fled when the Taliban seized power last month to return to the country, saying the group “will guarantee their security and safety”, Al Jazeera reported.

In an interview with Al Jazeera on Wednesday, Akhund also said that the caretaker government would guarantee the security of diplomats, embassies and humanitarian relief institutions, stressing that the group wanted to establish positive and strong relations with countries in the region and beyond.

Akhund, a close associate and political adviser to the late Mullah Omar, the founder of the Taliban and its first supreme leader, said the movement’s leaders faced “a great responsibility and test” towards the Afghan people.

“We have suffered huge losses in money and lives for this historical moment in the history of Afghanistan,” Akhund added.

“The stage of bloodshed, killing and contempt for people in Afghanistan has ended, and we have paid dearly for this.”

Akhund also reiterated the Taliban’s promise of amnesty for anyone who has worked alongside the US and the administration it backed following its 2001 invasion, the report said.

“No one will be able to prove that he was subjected to revenge. And in such tense circumstances, it is easy to do what you want. But the movement is disciplined and controls its gunmen. And, we have not harmed anyone because of his previous actions,” he said.

On Tuesday night, the Taliban announced the formation of Afghanistan’s caretaker government, with Akhund appointed as Acting Prime Minister.

In a statement following the announcement, the Taliban’s supreme leader, Haibatullah Akhundzada, said the urgent task would be to carry out reconstruction and rehabilitation, and the country would seek “strong and healthy relations” with its neighbours and all other countries.

According to the Taliban, the appointments were not final as these were acting positions, and the remaining posts would be announced later. 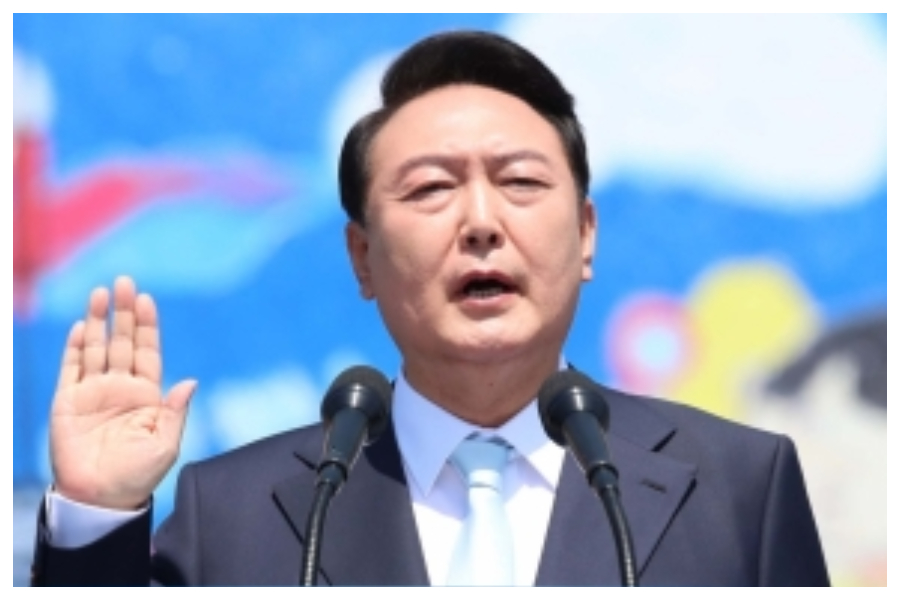 Yoon Suk-yeol, a former prosecutor, took the oath of office as the 13th President of South Korea on Tuesday and vowed to rebuild the nation on the foundation of a liberal democracy and market economy.

The 61-year-old kicked off his five-year term at midnight in the underground bunker of the new presidential office building in Yongsan by receiving a briefing from the Joint Chiefs of Staff.

To usher in the new administration, a bell-ringing ceremony was held at the stroke of midnight in downtown Seoul.

His inauguration ceremony was attended by 41,000 people, including foreign envoys such as US Second Gentleman Douglas Emhoff and Chinese Vice President Wang Qishan.

In his inaugration address, Yoon outlined various challenges facing the country and the world from pandemics and rearrangements in global supply chains to record-low growth and rising unemployment in South Korea.

“It is our generation’s calling to build a nation that espouses liberal democracy and ensures a thriving market economy, a nation that fulfils its responsibility as a trusted member of the international community, and a nation that truly belongs to the people,” he said before some 41,000 people gathered at the ceremony, noting that he is mindful of his “solemn duty to rebuild
this great nation”.

“While North Korea’s nuclear weapon programmes are a threat not only to our security and that of Northeast Asia, the door to dialogue will remain open so that we can peacefully resolve this threat.

“If North Korea genuinely embarks on a process to complete denuclearization, we are prepared to work with the international community to present an audacious plan that will vastly strengthen North Korea’s economy and improve the quality of life for its people,” he added.

Yoon takes over at a time when South Korea is struggling to deal with economic challenges stemming from the Covid pandemic, the war in Ukraine, the threat of North Korea’s nuclear and missile programs and other factors resulting in the phenomenon of “three simultaneous highs” in inflation, interest rates and exchange rates.

Both economic security and North Korea are expected to feature high on the agenda of Yoon’s first summit with US President Joe Biden in Seoul on May 21.

On the domestic front, he faces a hostile National Assembly controlled by the main opposition Democratic Party.

China’s intent has been to keep the boundary issue alive: Indian Army Chief China seems to lack the intention to find a resolution to the border dispute at the Line of Actual Control, Army Chief General Manoj Pande said on Monday, stressing that Indian troops continue to hold important positions along the LAC.

During an interaction with media persons, General Pande said, “Our guidance to them (troops deployed at LAC) is to be firm and resolute and prevent any attempt to alter the status quo.”

Talking about the current situation at the border and China’s intention, General Pande stated: “The basic issue remains the resolution of the border. What we see is that China’s intent has been to keep the boundary issue alive. What we need as a country is a ‘Whole of nation’ approach and in the military domain, this is to prevent and counter any attempt to alter the status quo at the LAC.”

The Army chief said that his aim and intention is to establish status quo ante prior to 2020 and re-establish trust and tranquility. But he clearly stated that it can’t be a “one way affair” and efforts should be made from both sides.

He stated that in the last couple of years the Indian Army has taken the decision to rebalance and reorient to deal with the situation in Eastern Ladakh.

Ever since the border dispute, the force is carrying out reappraisal and reassessment and taking certain actions to have a robust posture along the LAC. “Adequate forces are available to deal with all types of contingencies,” he added.

The Army’s focus at the LAC is to upgrade Intelligence Surveillance and Reconnaissance (ISR) and build our infrastructure to support operations and logistics. Induction of new technologies is part of the ongoing process of capability development along the entire northern border, he said.

To resolve the border dispute with China, the Army chief said, India is engaging in diplomatic and military talks which so far has resulted in disengagement in the north and south of Pangong Tso, Gogra and PP 14 (Galwan valley). Amidst violent clashes and unrest in Colombo, Sri Lanka’s Prime Minister Mahinda Rajapaksa on Monday resigned from his post.

He handed over his resignation to President and his younger brother Gotabaya Rajapaksa.

Pro-Rajapaksa supporters met Mahinda Rajapaksa in the morning and insisted he not step down. They later armed themselves with clubs and attacked the anti-government protesters who had been in front of PM’s house first and burnt the huts. Later, they marched to the main anti-government protest site near President’s House and attacked the protesters there too.

Main opposition leader Sajith Premadasa, who visited the site, too was attacked by pro-Rajapaksa supporters.

However as the attackers who were going back in buses, public on various locations attacked them and some of them were thrown into rivers.

As the violence was continuing, curfew was imposed across the entire island.

Soon after, US Ambassador to Sri Lanka Julie J. Chung, in a tweet, condemned the violence in Colombo.

“We condemn the violence against peaceful protesters today, and call on the government to conduct a full investigation, including the arrest & prosecution of anyone who incited violence. Our sympathies are with those injured today and we urge calm and restraint across the island,” the Ambassador said.

Condemning the attack, doctors at all government hospitals are to stay away from work on Tuesday.

With severe shortages of many essentials including food, medicine, fuel and cooking gas, people have been protesting on streets for months and on Friday, trade unions, both private and government, launched a major strike demanding both President and PM Rajapaksa to resign. Trade unions have given an ultimatum to the government to resign before Wednesday.

Main opposition have filed two no-confidence motions to remove the President and the PM and they are to be fixed for voting.