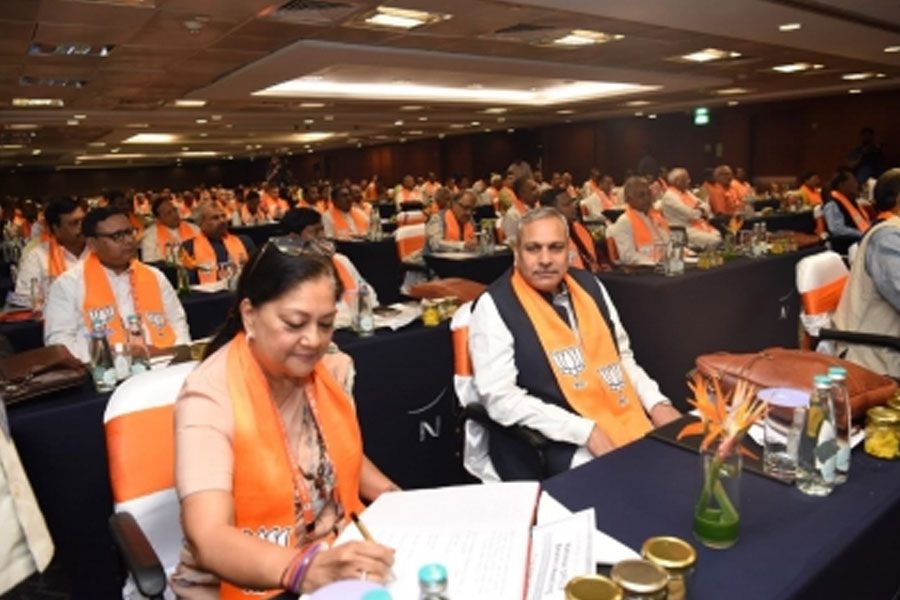 BJP national vice-president Vasundhara Raje on Saturday said two resolutions will be passed during National Executive Committee (NEC) meeting and topics or issues of political resolution will be decided by the Committee.

She also said that party will launching several new outreach programmes like ‘Har Ghar Tiranga’ and further strengthen ‘panna pramukh’. The BJP NEC will also make a statement on state of affairs in Telangana.

Sharing the details of national office-bearers’ meet, former Rajasthan Chief Minister Raje said that the two resolutions one political and second economic will be passed in the NEC after discussion.

“During national office-bearers meet, draft of resolutions was discussed,” she said.

Asked about recent killing in Udaipur and Supreme Court’s comment on Nupur Sharma’s controversial statement, Raje said that topics of political resolution will be decided by the NEC.

She informed that the recent Assembly polls of Uttar Pradesh, Manipur, Uttarakhand and Goa, local bodies polls, bypolls of Rampur, Azamgarh and Tripura were also discussed.

She said that as part of ‘Azadi Ka Amrit Mahotsav’, the BJP will launch ‘Har Ghar Tiranga’ to connect with people and to make it a large movement. “We are trying to reach out 20 crore homes during the campaign,” she said.

“The national office-bearers meet also emphasise on more pravas of leaders so that they stay among the people.”

Emphasis also given on further strengthening of booth. “It has been decided to form team of 200 active workers at each booth, form Whatsapp group,” she said.

Related Tags:BJPVasundhara Raje
Up Next 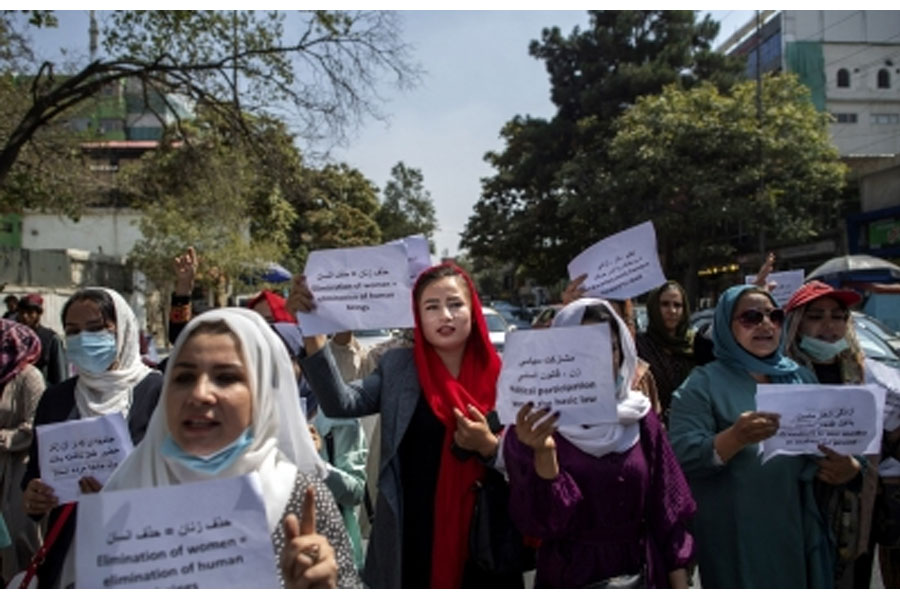 A peaceful protest by dozens of women who were marching in the streets of Kabul on Saturday chanting “food, work, and freedom” was attacked and stopped by Taliban forces.

Another video clip showed a small group of women cornered by the Taliban in a closed place.

“We are inside a drug store, they have imprisoned us here,” an activist said in one of the videos.

The protesters also chanted that they are tired of discrimination against women.

As the one-year anniversary of the Taliban regime gets closer, women are once again on the streets to denounce the restrictions imposed by the regime on their rights to education, work and freedom of movement.

Since returning to power in August 2021, the Taliban have curtailed basic women’s rights and those who have protested have been suppressed.

No country has recognised the Taliban’s de facto government. 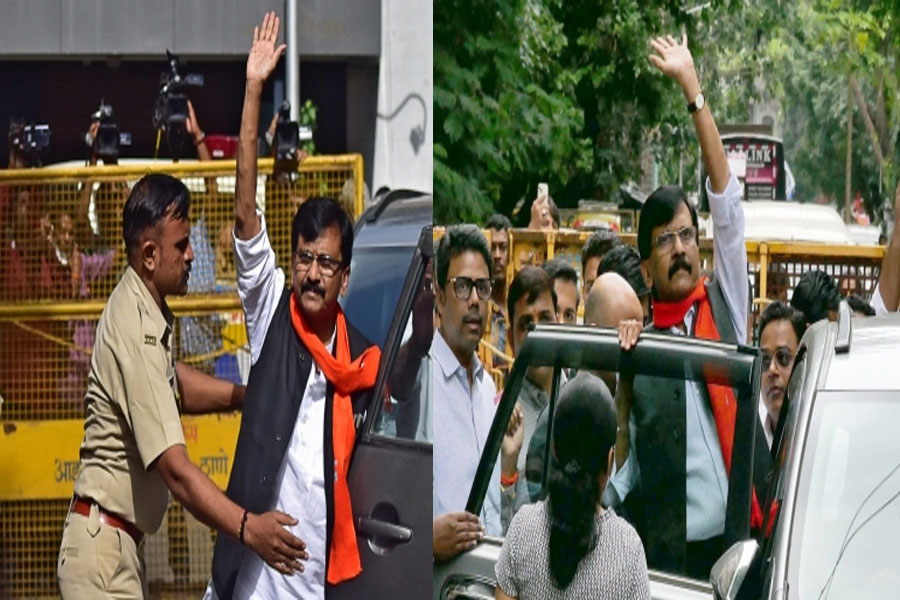 A Special PMLA Court here on Monday sent Shiv Sena MP Sanjay Raut to a 14-days judicial custody till August 22, eight days after he was arrested by the Enforcement Directorate (ED) in an alleged money-laundering case.

The ED had raided Raut’s residence in Bhandup on July 31 and arrested him in the wee hours of August 1 in connection with a money-laundering case detected from the redevelopment project of the Patra Chawl, Goregaon, by Guru Ashish Construction Pvt. Ltd., a subsidiary of the HDIL.

On Saturday, the ED interrogated the MP’s wife, Varsha Raut for around 10 hours in the same case in which it had earlier arrested his close associate, Pravin Raut. 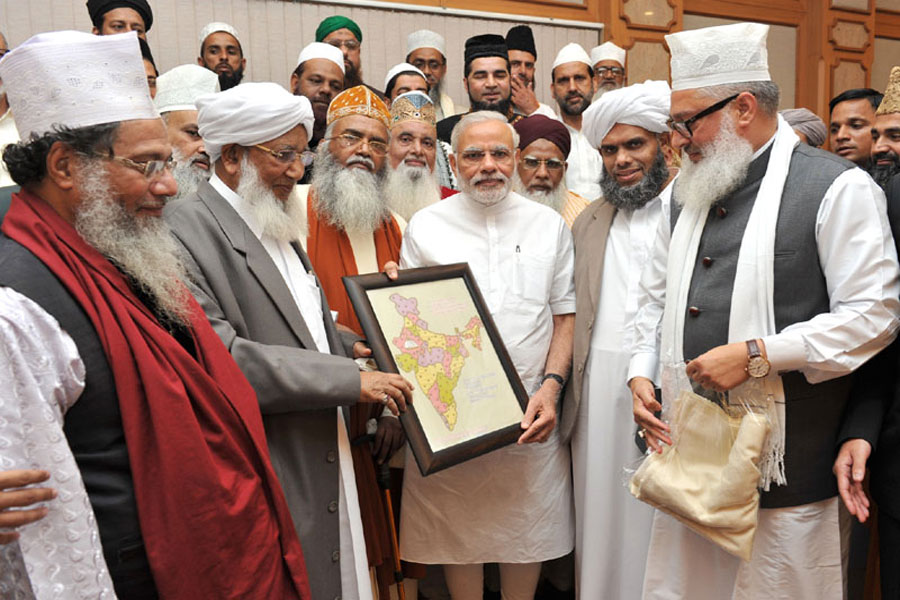 A regional level Sufi conference was organised on Saturday at Baba Shukur Din RA at Watlab Sopore by Voice for Peace and Justice with an intent to laid the emphasis on Peace, communal harmony, brotherhood and tolerance.

The event was attended by hundreds of people from different nook and corners of the valley.

During the conference, a number of Sufiyana music segments were performed by the Kashmiri singers of the valley which attracted a good audience including writers, poets, authors and other intellectuals.

While Bashir Ahmad, Administrator of J&K Waqf Board for Baba Shukur ud Din RA Shrine, emphasised that Sufi saints travelled tremendous distances to unite people of all creeds, castes, and religions, he also stated that in order to restore the atmosphere in Kashmir, Sufism must be promoted and practised.

He said: “Thanking Voice for Peace and Justice for their steadfast efforts to bring back Sufism in Jammu and Kashmir.”

In his speech, Haji Mohammad Abdullah Dar, a renowned social activist from Sopore brought attention to Baba Shukur Din RA’s teachings and highlighted his contributions to the wellbeing of the people of Kashmir.

He continued by saying that we must continue the legacy of the Sufi saints because they left their comfort zones only to guide people down the right path.

Their contributions to world peace and religious harmony will be revered and remembered forever, he said. He also expressed his gratitude to the Voice for Peace and Justice for occasionally hosting such seminars.

The president of Voice for Peace and Justice, Farooq Ganderbali, a well-known social activist, stated in his address that although radical and divisive forces in Kashmir are free to label us traitors or whatever else they choose, it is a bitter truth that religious extremism is converting playgrounds into cemeteries.

While the prominent members of the extremist groups are happily settled, the mothers of the poorer members, who were used as cannon fodder for their own personal mileage, are still wailing and waiting for their return.

In order to live in peace in Kashmir, it is imperative that Sufism be revived. The Voice for Peace and Justice is determined to reviving Kashmir’s Sufi culture, he added.

While refreshments were provided to the participants, mementos were awarded to individuals who had made outstanding contributions to the resurgence of Sufism in Kashmir.