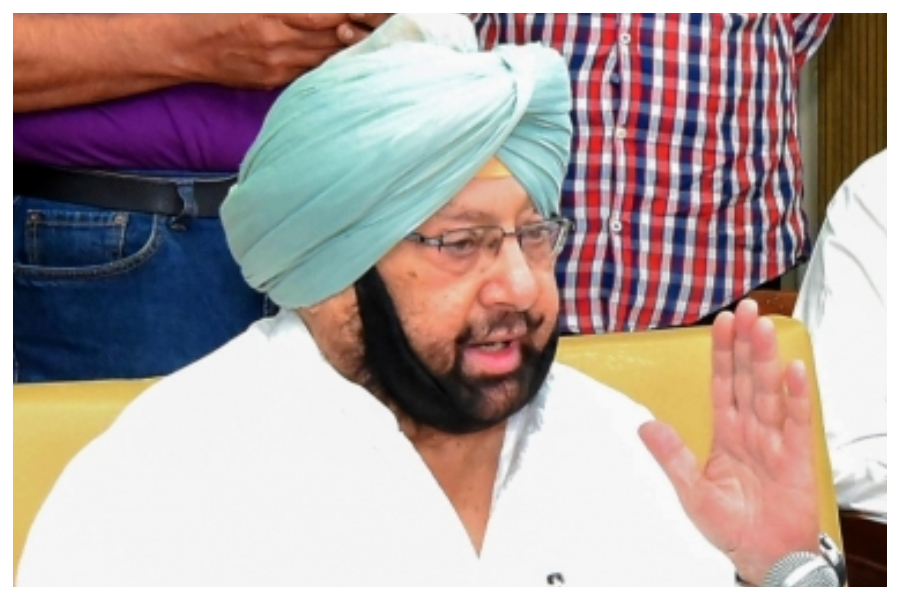 ormer Punjab Chief Minister Amarinder Singh on Wednesday announced the launch of his own political party, ahead of the Assembly elections slated for early next year.

However, he said the name of the party, which could have an alliance with the BJP, would be announced later after consulting the Election Commission of India.

Amarinder Singh told the media here that he would be meeting Union Home Minister Amit Shah on Thursday regarding issues concerning the state. This would be his third meeting with him in recent days.

The former two-time Chief Minister favoured the deployment of the BSF up to 50 km of the India-Pakistan border, saying this was required for the security of the state.

On his resignation from the Congress, he replied: “I have been in the Congress for the past 52 years. If I can’t resign for the next 10 days, what is the harm to it.”

Earlier, responding to personal attacks by his former Congress colleagues, Amarinder Singh on Tuesday said: “From personal attacks they’ve now stooped to threats and harassment of my supporters in Patiala and elsewhere.

“Let me tell my rivals they can’t defeat me with such low-level political games. They will neither win votes nor people’s hearts with such tactics.”

He added: “Those who have stood by me have done so because they believe in and want to continue working for Punjab’s peace and development. They will not be scared away by such petty acts of intimidation or persecution. We will continue to fight for Punjab’s future.”

Formally saying goodbye to the Congress which made him the Chief Minister of Punjab twice and the state party President thrice, an “upset” Amarinder Singh last week said that he would soon announce the launch of his own political party to serve the interests of the people, including the farmers who’ve been fighting for their rights for over a year now.

He also said he is hopeful of a seat-sharing arrangement with the BJP for next year’s Assembly elections in the state, if the farmers’ issues are resolved in their interest.

He added that he would not rest until he can secure the future of his people and his state.

After his resignation, Amarinder Singh held meetings with Union Home Minister Amit Shah, triggering speculation he could join the BJP.

“Punjab needs political stability and protection from internal and external threats. I promise my people that I will do what it takes to ensure peace and security, which is today at stake,” read an earlier tweet by Amarinder Singh.

Since his resignation as the Chief Minister, Amarinder Singh has been targeting state Congress President Navjot Sidhu by publically saying that he would fight his possible elevation to the Chief Ministership tooth and nail, and is ready to make any sacrifice to save the country from such a “dangerous man”.

He has also claimed that the Gandhi siblings (Priyanka and Rahul) were “quite inexperienced” and “their advisors were clearly misguiding them”.

After months of infighting within the Congress, Amarinder Singh had submitted his resignation as Chief Minister on September 18.

As Delhi gets its first electric bus, BJP took a dig at the Aam Aadmi Party-led state government for procuring just a single bus during their last seven years of rule.

Tiwari blamed the Kejriwal-led government of being “visionless” and “department less”. He urged the people of Delhi to look after their well-being as air pollution during winters is dangerous.

Terming it a “beginning of a new-era in the transport sector of Delhi”, Chief Minister Arvind Kejriwal had flagged off the first electric bus on Monday.

“We aim to bring in 2,000 electric buses in the coming years. Since 2011, not a single new bus had been procured by the DTC; this is the first new bus being added to its fleet in a decade. The public should also contribute to this war against pollution by switching their vehicles to electric,” he said as he flagged off the bus from the Indraprastha depot.

These state-of-the-art buses are 100 per cent electric with zero tailpipe emissions. They are among the 300 electric buses that will be inducted under DTC. The total fleet of 300 buses will run from Mundela Kalan (100 buses), Rajghat (50) and Rohini Sector 37 (150 buses).

The electric air conditioned buses have kneeling ramps for differently abled passengers, and special pink seats for women passengers. They are also equipped with CCTV cameras, connected to a two-way Central Command and Control Centre (CCC) at Kashmere Gate, 10 panic buttons in each bus and a hooter.

Facing criticism over poor implementation of the liquor ban, the Nitish Kumar government in Bihar is likely to give some relaxation to the violators.

According to a top official of the JDU, the state government is ready to review this issue and a proposal is likely to be put on table in the upcoming budget session of the Bihar Vidhan Sabha.

As per the proposal, the violators who are caught in drunken state can be let off after paying penalty on the spot. Though, it is not applicable on repeat offenders. A person repeatedly violating the norms of liquor prohibition law would be liable to face jail term.

Such a relaxation would allow liquor consumption at home and would also promote the home delivery concept, which is already popular among habitual drinkers in Bihar.

The JDU official further said that the vehicle used for smuggling of liquor could be released after paying a fine.

He said that the Chief Minister is under huge political pressure after a series of spurious liquor tragedies in different districts in the last four months that have taken the lives of more than 80 persons and many others have lost their eyesight.

Reacting to it, Danish Rizwan, the chief spokesperson of HAM said: “Chief minister Nitish Kumar, instead of bringing amendment or review of liquor prohibition law, should do a survey on this issue. If common people of the state are satisfied with the amendment or review, our party will not go against it. If people of Bihar are in favour of withdrawal of the liquor ban, we also respect that decision.”

This issue is severely affecting Nitish Kumar government especially after its alliance partners BJP and HAM are extremely vocal. They want a review of the liquor prohibition law. The liquor ban was enforced in Bihar in April 2016.

Though, this would not be the first case of amendment in liquor prohibition act. In 2018, the state government made a provision to grant bail to normal offenders at the police station level. The offenders have to pay Rs 50,000 as fine. In case of offenders unable to give a penalty, they would be liable to face jail term. Under the liquor prohibition law, the maximum jail term is 10 years.