Pitch invader Jarvo, with real name as Daniel Jarvis, was arrested on Friday after a collision on the field with England batsman Jonny Bairstow during day two of the fourth Test at The Oval on Friday. It was the third time that Jarvo ran onto the cricket field in the ongoing Test series after Lord’s and Headingley.

Jarvis, a self-styled YouTube prankster with 127,000 subscribers on his channel named “Jarvo69 aka BMWJarvo”, ran on the cricket field with ball in hand from the Vauxhall End in the 34th over of England’s innings in the first session. He was trying to bowl to Ollie Pope but crashed into Bairstow at non-strikers end. Bairstow was visibly furious and tried to keep Jarvo away from himself.

The act by Jarvo was met with boos from the spectators. Jarvo was eventually escorted off the field by security staff at the stadium. Post this, Indian captain Virat Kohli was seen having conversations with umpires Alex Wharf and Richard Illingworth. The assault allegation is related to a tussle with security staff rather than the collision with Bairstow.

“A man has been arrested on suspicion of assault following an incident at the Oval Cricket Ground on Friday, 3 September. He remains in custody at a south London police station,” said the Metropolitan Police on Friday.

In Headingley, Jarvo entered the pitch wearing pads, helmet and a bat. This led to the Yorkshire County Club banning him from entering the stadium for lifetime. At Lord’s, he had entered the outfield posing as an Indian bowler.

“Any pitch invasion is completely unacceptable. The ECB and our host venues do not tolerate any such behaviour which risks the safety of players, officials and staff. The ECB works closely with all our venues to share information and enhance their security operation,” said a spokesperson from the England and Wales Cricket Board (ECB). 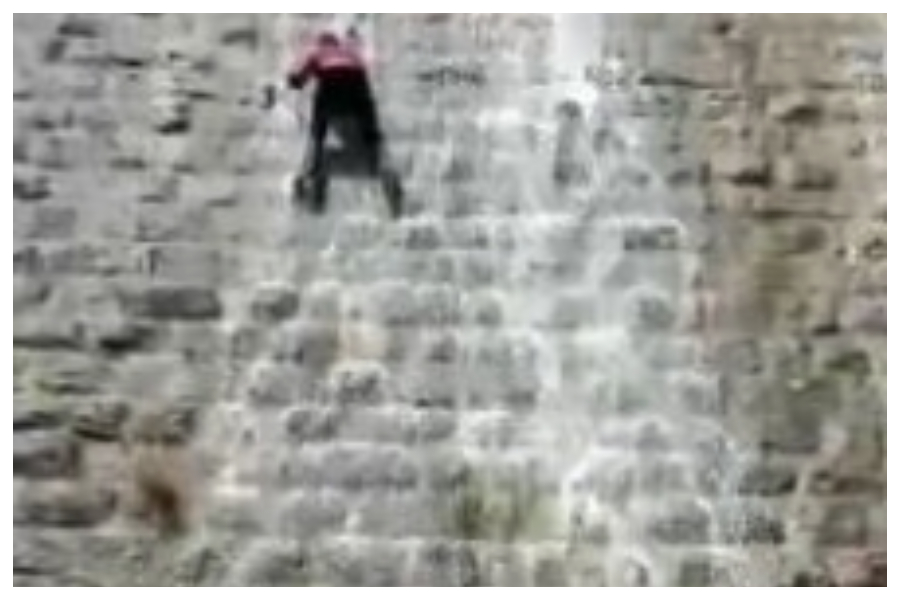 A youth, who tried to indulge in adventure by trying to climb a dam face in Karnataka’s Chikkaballapur, fell after ascending just 30 feet, as per a video going viral on social media on Monday, and was seriously injured.

The incident had taken place at the Srinivasa Sagar dam located near Chikkaballapur city recently.

In the video, the youth is seen climbing the dam even as water is overflowing from it. He had climbed up 30 feet amid cheers from his friends, but then suddenly lost his balance and fell off, shocking everyone. The video shows the youth collapsing after the fall.

He had been shifted to hospital and his condition is said to be serious.

Tourists are flocking the Srinivasa Sagar dam which is overflowing following incessant rains.

Police have registered the case in this regard, and district authorities have tightened security at the spot. 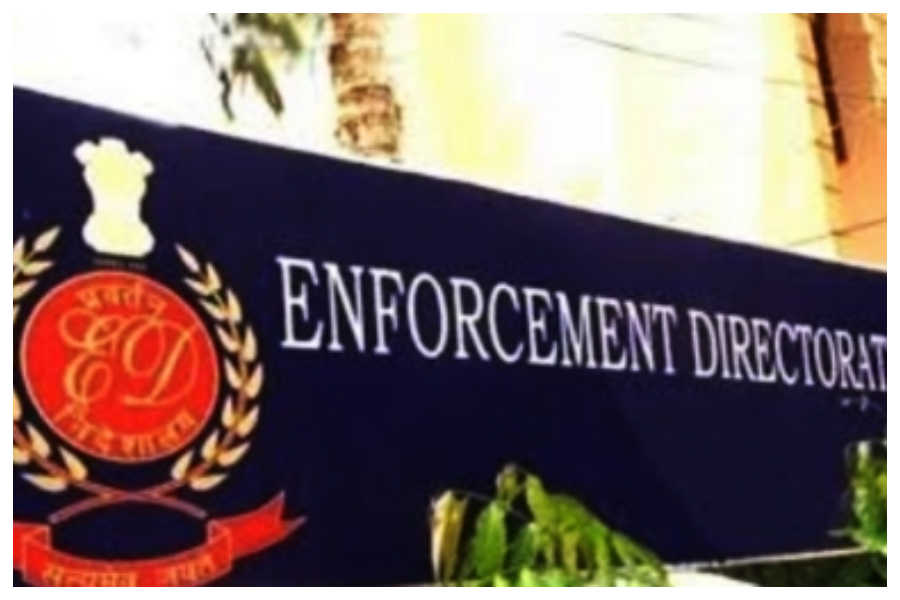 The Enforcement Directorate(ED) on Monday said that it has recovered foreign currency worth Rs 1.53 crore from a person at Kolkata Airport under Foreign Exchange Management Act(FEMA).

A senior ED official said that the search was conducted on the basis of Information received from the Airport Intelligence Unit, NSCBI Airport, Customs Kolkata on the night of May 21 that a passenger has been intercepted along with foreign exchange without any explanation.

“He had travelled from Gorakhpur to Kolkata by domestic Flight No 6E7306. During search, 1998 number of foreign currencies consisting of 1,65,000 USD and 30,460 Euro (Total equivalent to Rs 1.53 crore) were found in the possession of the passenger. However, he failed to provide the source of said foreign exchange and the purpose of travelling with such a huge amount of foreign exchange without any valid document,” said the ED official.

The official said that the said amount of currency was seized under FEMA.

An ECIR (FIR) has been lodged in this connection by the ED.

Further investigation is under progress. 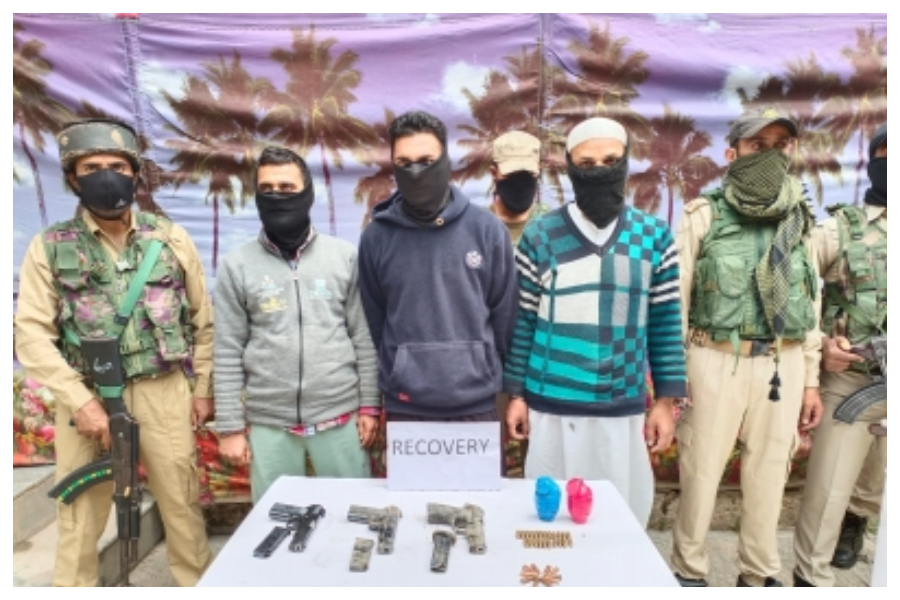 Three LeT militants and their associate were on Monday arrested for the murder of a sarpanch in Jammu and Kashmir’s Baramulla district last month, police said.

Manzoor Ahmad Bangoo, the sarpanch of Goshbugh village in Pattan tehsil of Baramulla, was killed by militants on April 15.

“During investigation in the case of killing of sarpanch of Goshbugh, Manzoor Ahmad Bangoo, three suspects, namely Noor Mohammad Yatoo, Mohammad Rafiq Parray, and Ashiq Hussain Parray, all residents of Goshbugh Pattan, were arrested after receiving information from reliable sources about their involvement in militancy-related activities,” a police official said.

“The arrested persons revealed that they were in contact with Mohammad Afzal Lone, an OGW of Lashkar-e-Toiba militant outfit, presently in judicial custody.

“Lone had directed his close aide Yatoo to motivate two persons from his area to join the militant ranks and he, in turn, contacted Mohammad Rafiq Parray and Ashiq Hussain Parray, both residents of Goshbugh, and motivated them to join militant ranks,” the official said.

Yatoo had directed the duo, along with his brother-in-law Mehraj-ud-din Dar, to meet Lone personally.

“All the three met Lone who motivated them and set targets. He also gave different assignments to them.

Police said Lone and his other three associates were arrested in connection with Palhalan grenade blast case.

“Their arrest delayed the actions of the three and they remained dormant until two local militants, namely Umer Lone and Gulzar Ganie of Wussan Pattan, who had recently infiltrated back from across the LoC after doing training of arms and ammunition, approached the trio and asked them about the arms and ammunition and the tasks given.

“They told them to complete the given assignments of killing the ssarpanches.”

According to the police, the conspirators set the target and carried recee of the aarpanch Bangoo (now deceased) and set a particular date for his killing.

“On that particular day, Ashiq Parray talked to Umer Lone through Facebook Messenger and briefed him about the plan which the militants executed on April 15 by killing the sarpanch in the orchards of Chanderhama Pattan.

“Upon further interrogation, Yatoo revealed that he gave the arms and ammunition to Lone… however more arms and few live rounds are still with him which are in a sealed box in his house.

Police said adding that so far, three pistols, two grenades, three magazines, and 32 bullets have been recovered in this case.