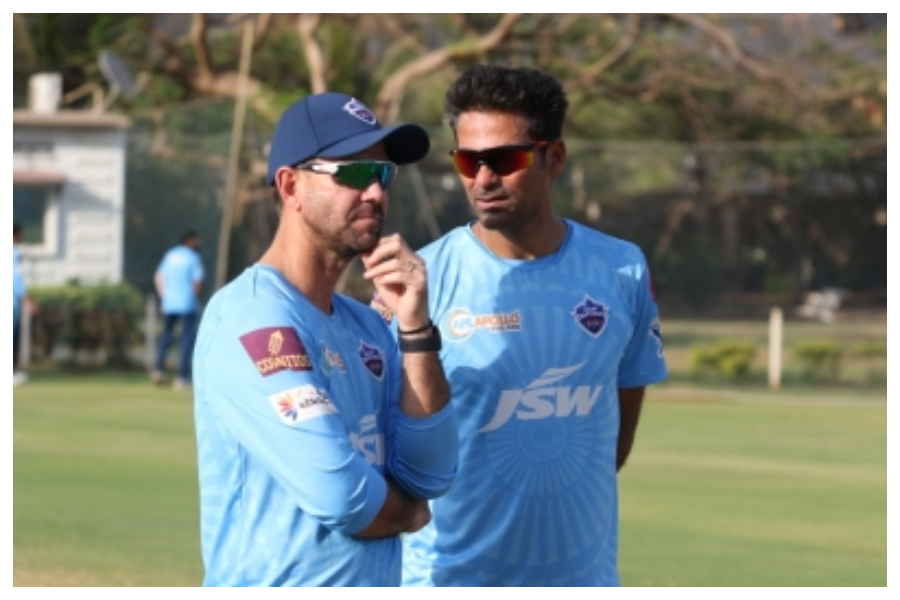 Delhi Capitals head coach Ricky Ponting has blamed his team’s inability to score more runs in the Powerplay as one of the things that contributed a great deal to his teams three wickets defeat to Kolkata Knight Riders in a thrilling Qualifier 2 at the Sharjah Cricket Stadium.

While Delhi could only score 38/1 in the first six overs, Kolkata Knight Riders blasted 51/0 in the Powerplay that set them up nicely in their chase of 136 runs. KKR Openers Shubman Gill and Venkatesh Iyer gave them a good start that eventually helped them overcome Delhi Capitals.

“I think the powerplays in both innings was probably the difference in the game. I don’t think we got enough in our powerplay with the bat. I think we were 37 (sic) at the end of our powerplay, which is probably, you know, 8 to 10 runs short of where we wanted to be and what the sort of par score is on this sort of wicket,” Ponting said in a virtual press conference after the match.

This was the time when Marcus Stoinis, who was promoted to No. 3 was at the crease. Stoinis, coming back from a hamstring injury, found run-scoring very tough against the spinners on a slow and low track as he scored 18 off 23 balls.

However, Ponting defended the decision to send Stoinis up in the order. “We thought long and hard about where Marcus’s best bet would be the batting order for us today. I mean, as we all are aware, he missed about three weeks with a hamstring injury, so he hadn’t played any cricket. We desperately wanted him back into the team today because we knew he could bat at the top of the order and bat down at the death if required.

“As you saw today, with that type of pitch, it’s really difficult for any new batsman to come in and start on. Even Shikhar at the top didn’t get away to the flier that we were after. Middle-order players, Indian players even struggled to get going on that surface. So, I think it was the right decision. We probably didn’t get the outcome that we were after, though,” he added,

He said his team will deliberate on the failure of their batsmen in the match.

“We didn’t bat well enough today, we didn’t get enough runs in the powerplay, we lost wickets too regularly through the middle of our batting innings. If it wasn’t for Hetmyer and Shreyas at the end, we weren’t looking anywhere near 130 odd, so we’ve been outplayed and we’ll talk about that when we make it back into the rooms after. It’s disappointing for us certainly to finish the way that we have.”

The former Australia captain also defended skippe’ Rishabh Pant’s decision to give Anrich Nortje only one over in the first 10 overs.

“We wanted to have Nortje through the middle overs. Some of the batsmen in the middle we feel, are probably a little bit susceptible to good quality fast bowling, so we wanted to save a couple for him through the middle and one at the end. So we’re running tactically tonight. I think Rishabh did a really, really good job. We didn’t get enough runs and we did a good job to claw our way back into the game and give ourselves a chance to win going into the last two overs.

“I think the captain was looking at trying a few different options to get a wicket in the powerplay. And then we wanted to be able to use a couple of overs of spin in the powerplay before the ball got too wet and basically difficult for the spinners to hang on to it too much. And it’s a technique you can use, not let the batter get settled against one type of bowler,” he explained.

Raider Sachin scored 10 points as three-time champions Patna Pirates defeated Puneri Paltan 38-26 in Match 17 of Pro Kabaddi League (PKL) Season 8 at The Sheraton Grand, Whitefield, on Tuesday. Sachin scored a Super 10 (10 points) and was ably supported by Patna’s defensive trio of Sunil (4 points), Mohammadreza Chiyaneh (3 points), and Sajin C (3 points). The lack of a quality raider despite promising performances from youngsters will be a cause of concern for the Puneri Paltan who succumbed to their second loss in three matches.

All eyes were once again on Pune’s Rahul Chaudhari but the showman, despite starting the match, was substituted for young Mohit Goyat by coach Anup Kumar in the first half. The trio of raiders including Aslam Inamdar and Pankaj Mohite caused problems for the Patna defence while at the other end Prashant Kumar Rai and Sachin were equally effective.

Patna were facing the risk of an all-out with six minutes left to half-time, but their defender Sajin C completed a Super Tackle to turn the momentum. The three-time champions got lucky later when Monu Goyat entered the lobby without contact, in a do-or-die raid only to be followed by three Pune defenders who had been deceived by his actions. The first half ended 14-14 with Pune having just two men on the mat.

Pune coach Anup Kumar clearly expected from his set of raiders and brought in Shubham Shelke for Pankaj Mohite in the second half. But Patna kept fighting back, thanks to the largely confident tackles from the likes of Mohammadreza Chiyaneh and Sajin. With 10 minutes remaining, Patna had a four-point lead and that was extended a’ Pune’s plan to play on the Do-or-Die raid backfired. Sachin scored two points in the crucial raid for Patna to inspire another ALL OUT in the 13th minute and open a 10-point lead.

Patna maintained the momentum and though Sunil and Vishal Bharadwaj picked up yellow cards in the final minutes as the match became intense the three-time champions ensured there was no late comeback by Pune and clinched an important win.

Bengal Warriors defeated Gujarat Giants 31-28 on Day 3 of the Pro Kabaddi League Season 8 held at The Sheraton Grand, Whitefield, here on Friday. This was Bengal Warriors’ second win in as many matches while Gujarat Gaints have one win and one loss. The Warriors have 10 points the same as Dabang Delhi but are placed second on a lower points-difference while Gujarat have six points.

Bengal Warriors started well and established a slender lead (16-11) against Gujarat Giants at half-time. They maintained their advantage despite the valiant efforts of the Gujarat Giants, managed to register a narrow victory.

Uttarakhand Chief Minister Pushkar Singh Dhami on Sunday announced that Indian wicket-keeper batsman Rishabh Pant has been appointed as the brand ambassador of the state.

Taking to Twitter, the Chief Minister said that Pant will encourage the youngsters to take up sports.

“One of the best cricket players of India, the idol of youth and son of Uttarakhand, Rishabh Pant has been appointed as “State Brand Ambassador” by our government with the aim of encouraging the youth of the state towards sports and public health,” tweeted Dhami in Hindi, along with the video.

In the video, CM Dhami can be seen interacting with Rishabh and asking about his well-being.

The attacking batter also thanked the Chief Minister for the opportunity, saying that he will try his best to motivate people towards fitness.

“Thank you @pushkardhami sir for giving me the opportunity to be the Brand Ambassador of promoting Sports and General Health among the people of Uttarakhand. I’ll do my best to spread this message and feeling happy that you are taking these steps towards a fitter India,” tweeted Pant.

“Coming from a small town of Roorkee, I am confident that the people here have the ability to make the country proud in various fields of life,” he added.

The 24-year Pant, who was rested for the New Zealand Tests, is currently in Johannesburg, South Africa as the Indian Team is all set to face Proteas in the three-match Test series, starting December 26.