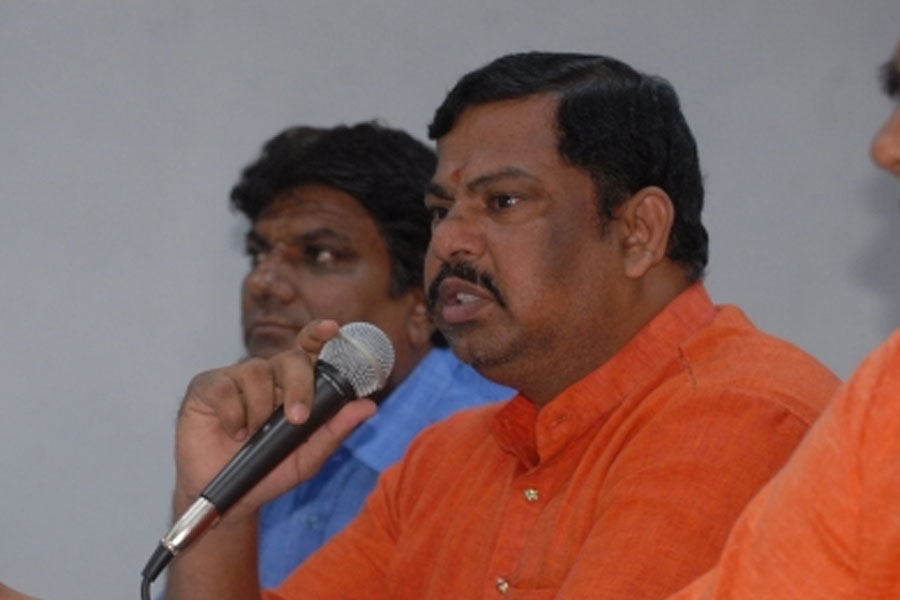 Hyderabad police on Friday detained BJP MLA T. Raja Singh who had threatened to burn down the venue of stand-up comedian Munawar Faruqui’s show scheduled to be held here Saturday.

As Raja Singh along with his supporters was trying to leave for Shilpa Kala Vedika, the venue of the show, police detained him and shifted him to Bolaram police station.

The controversial MLA told media persons before being taken in a police vehicle that he was not being given any information by the police.

Raja Singh’s supporters raised slogans against the state government and Chief Minister K. Chandrashekar Rao when police officials detained him from his office in Mangalhat. Some of them tried to block the police vehicle but were taken into custody.

Police had tightened the security at the MLA’s office since morning following information that he and his supporters may create disturbances at the venue.

Raja Singh, who represents Goshamahal constituency in Hyderabad, had warned that if the comedian goes ahead with the show, he would beat him up and burn down the venue.

A video of the MLA, threatening the comedian, had surfaced on social media last week. He alleged that Faruqui had hurt the religious sentiments of Hindus by making jokes on their gods.

The BJP MLA’s warning came after Munawar took to his Instagram account to announce his show “Dongri to Nowhere” in Hyderabad on August 20.

He had earlier planned to perform in Hyderabad in January but the show had to be canceled due to a surge in Covid-19 cases.

“In the past too, our idiot minister KTR had offered police protection and invited him, saying his event will be a great success. But even then, when Hindu groups across Telangana united to threaten him, he got scared and cancelled the event,” Raja Singh said, in a reference to state minster K.T. Rama Rao.

“I am seriously telling this. Everybody knows about the law and order in Telangana. I am telling KTR, if you don’t want this to deteriorate further, don’t allow the comedian in Hyderabad,” the MLA from Goshamahal said.

The BJP leader went on to issue an open threat. “See what will happen, If they invite him. Wherever the program is, we will go and beat him up. Whoever offers him a venue, we will burn it down. If something goes wrong, KTR and the government and police officers will be responsible,” Raja Singh said.

The BJP leaders had similar threats in January when Munawar had planned to perform. However, the show had to be cancelled due to restrictions imposed on public gatherings in view of a surge in Covid cases.

Faruqui had announced his Hyderabad show on December 22, 2021, days after KTR had extended him an open invite to perform in Hyderabad, saying the city is truly cosmopolitan.

The stand-up comedian had earlier tweeted that he was receiving several calls and mails from Hyderabad to perform in the city.

AIMIM to contest UP municipal polls