The increasing speed of Corona has started scaring once again. Despite this, its government machinery or organizations are not taking lessons from the second wave of Corona. If we talk about St. Joseph’s School in Agripada, Mumbai, then about 22 children living there have been covid positive. Apart from this, some of the staffs of the school are also suffering from corona. Despite the school management being aware of this, no concrete steps were taken. Such allegations are being made by the parents of the children.. if this is true then the great negligence of the school management is coming to the fore.

After this news was published in the media, BMC sealed the school and the children have been admitted to Nair and another nearby hospitals. After the school is sealed, the parents of the children studying there are accusing the school management of hiding information. One parent said on condition of anonymity that the children were called for the dress on the day of the seal. And before this, the children living there have met and played with the outside children many times. This is the allegation by parents.

When Mumbai Press Reporters went to the School to know the truth of the parents’ allegation, no one was present there. A policeman posted there told the Reporter that no one is here since morning. There was a madam but she also left. In such a situation, if the children outside also got covid positive, who met the infected children of the school, Then the situation can be worrying. However, the hope is that everyone gets well from Corona soon. but the question is the same. After all, who is responsible for this??? After all, why are we not taking lessons from the havoc of the second wave of Corona? 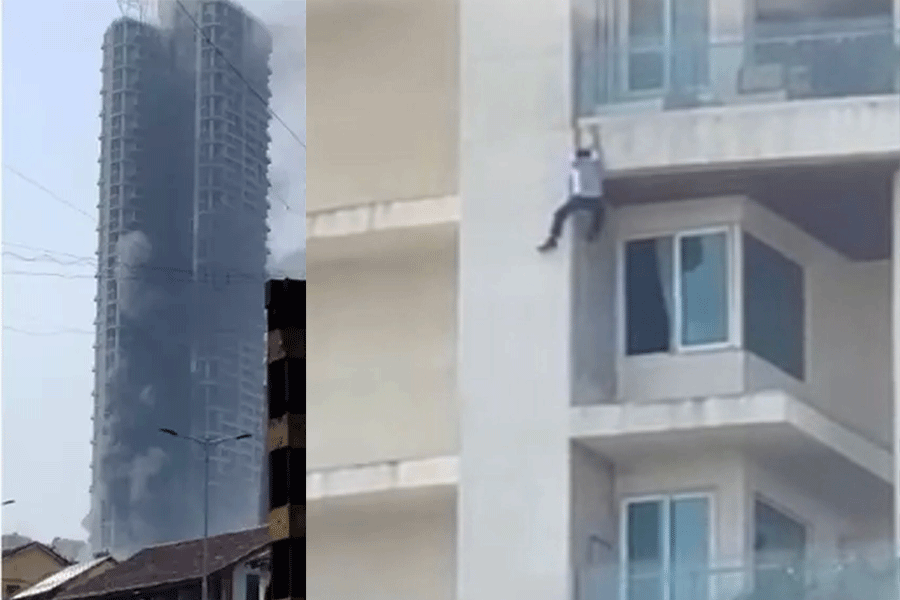 A fire erupted on the 19th floor of a 61-storey residential building in south Mumbai, sending panic waves among the residents and resulting in the death of one person, here on Friday, officials said on Friday.

The blaze broke out in the Avigna Park building in Currey Road around noon, with thick clouds of smoke billowing out, sending the residents scurrying out to safety.

One panicky man was seen coming out of the burning floor, hanging onto a ledge, losing balance and falling to his death below. He was identified as Arun Tiwari, 30, according to the BMC Disaster Control.

At least 15 fire-tenders rushed to the spot and battled the conflagration, attempting to stop the flames from spreading to the higher floors, while Mumbai Mayor Kishori Pednekar went and oversaw the rescue operations.

A majority of the residents managed to evacuate themselves, including several senior citizens and children, though two persons are feared trapped inside.

The cause of the blaze, tentatively believed to be due to a short-circuit, is being probed and the building reportedly has all fire-safety measures in place, said the residents.

India on Thursday achieved the major milestone of 100 crore vaccination-mark, nine months after the nationwide inoculation programme was started to protect the people against Covid-19.

The CoWin portal mentioned that a total of 100 crore vaccine doses has been administered so far to the eligible population under the vaccination drive in India.

India’s vaccination drive against the Covid pandemic was launched on January 16, 2021. The healthcare workers were the first ones to get ones. Later, the frontline workers were also included in the drive from February 2. The state and central police personnel, Armed Forces, Home Guards, Civil Defence and others were included in the vaccination drive.

Prime Minister Modi said in a tweet, “India scripts history. We are witnessing the triumph of Indian science, enterprise and collective spirit of 130 crore Indians. Congrats India on crossing 100 crore vaccinations. Gratitude to our doctors, nurses and all those who worked to achieve this feat.

Congratulating the nation on this historic moment, the Union Health Minister Mansukh Mandaviya said in his tweet, “Congratulation India! Under the visionary Prime Minister Narendra Modi, it has been achieved”.

As India has achieved this historical landmark, the health ministry has planned several events to mark the occasion. The Health Minister will release a song and an audio visual film to celebrate the milestone of administering 100 crore Covid-19 vaccine doses. Mandaviya will release the film and song at the Red Fort later in the day. In another event, Modi will visit the centre-run Ram Manohar Lohia Hospital in Delhi.

India reported 18,454 fresh Covid-19 cases on Thursday, and 160 deaths in the last 24 hours, even as the recovery rate continues to be 98.15 per cent as per the Ministry of Health and Family Welfare data.

Consequently, India’s recovery rate stands at 98.15 per cent, currently at its highest peak since March 2020.

The active caseload has fallen below 2 lakh-mark and is presently at 1,78,831. Active cases at present constitute less than 1 per cent of the country’s total positive cases.

The testing capacity across the country continues to be expanded. India has so far conducted over 59.57 crore cumulative tests.

India has achieved the landmark in vaccinating its population with over 1 billion doses.

According to the data shared by the health ministry over 10.85 crore balanced and unutilized vaccine doses are still available with the States/UTs