Southern superstar-turned-politician Kamal Haasan is likely to face a tough electoral battle in Tamil Nadu’s Coimbatore South from where he filed his nomination papers for the April 6 Assembly elections from his party Makkal Needhi Maiam (MNM).

Kamal will take on BJP leader, Vanathi Srinivasan, who is the National president of the party’s woman’s wing, the Mahila Morcha, who is contesting as the AIADMK-BJP alliance candidate.

Congress leader Mayura Jayakumar will be fighting the elections as the DMK-Congress combine candidate, while the Amma Makkal Munnetra Kazhagam (AMMK) has fielded former AIADMK leader, Challenger R. Doraisamy who is an industrialist.

Srinivasan had polled 33,113 votes in the 2016 assembly elections contesting alone with a voting percentage of 21.57 and the AIADMK candidate Amman K. Arjunan had won the seat by polling 59,788 votes with a percentage of 38.94.

The AIADMK and BJP are now in an electoral alliance and Srinivasan is the candidate of the combine which makes her formidable and with a high winning chance.

Mayura Jayakumar as a Congress candidate in the 2016 assembly elections had polled 42,369 votes at 27.60 voting percentage and lost the elections to Amman K. Arjunan of the AIADMK.

Challenger Dorai was a former MLA of AIADMK who had defeated the then DMK candidate Pongalur N. Palanisamy by a margin of 27,796 votes.

The CPM has also a presence in the constituency and the party candidate, C. Padmanabhan had polled 7,248 votes at 4.7 per cent.

Kamal Haasan is banking his hopes on the votes polled by his party Vice President R. Mahendran’s putting up a good show in the 2019 parliament elections when the MNM had contested for the first time.

Mahendran had polled 23,838 votes from the Coimbatore South assembly segment in the elections but was a distant third to P.R. Natarajan of the CPM-DMK combine, who got 64,453 votes while C.P. Radhakrishnan of the BJP garnered 46,368 votes.

However, Kamal Haasan is much more popular face among the masses than Mahendran and if Kamal gets the ground support from the Muslim community coupled with the votes garnered by Mahendran, there is a possibility of him winning the polls.

The minority Muslims and Christians constitute 25 per cent of the votes in the constituency and the Dalit’s have a 20 per cent vote bank. Kamal Haasan is banking on these voters along with his popularity.

R. Mahendran speaking over telephone told IANS: “Kamal Haasan is a popular person across South India and the votes I got in the last Lok Sabha polls coupled with the support he is to garner from the minority Muslims, Christians and Dalits will bring him a spectacular victory.

“The superstar is a hit here since he has filed the nominations and people are looking forward to him winning.”

Kamal Haasan is in the constituency, meeting people, attending Gyms, drinking tea at the wayside eateries, listening to people’s issues and also trying a hand at the martial art forms of Coimbatore and basking in the popularity among the people.

A tough fight is in the offing at Coimbatore South seat.

Karnataka Chief Minister Basavaraj Bommai’s ambitious programme ‘Grama One’, aimed at providing the government services at doorstep, was launched in 3,026 Gram Panchayats on Wednesday. It would be extended all over the state by the end of March, the Chief Minister announced.

Speaking after launching the programme virtually in 12 districts, he said that the ‘Grama One’ has been launched with an objective of taking the government services to the doors of the people without making them spend time and money.

The programme intends to provide Adhar Card, Ration Card and other services related to departments like Agriculture, Horticulture, Revenue, Women and Child Welfare. It would also reduce the rush at Taluk offices and effect decentralisation of power, he said.

The programme will provide “uninterrupted services” to the public with the aid of technology and modern equipment. The service has been launched in 3,026 Gram Panchayats of 12 districts. It will restore people’s faith in the functioning of the government through efficient services, Bommai said.

Modern technology is playing a key role in taking the villages from Gram Swaraj to Gram Suraj. It is realising the ideals of Gram Swaraj of Gandhi and Gram Suraj of Vajpayee, Bommai said.

The Chief Minister suggested the legislators and ministers to spread awareness about ‘Grama One’ among the people. About 6 lakh requests were received and services were provided during the experimental stage of the programme. Tehsildars and Assistant Commissioners play a key role in the success of ‘Grama One’, he said. 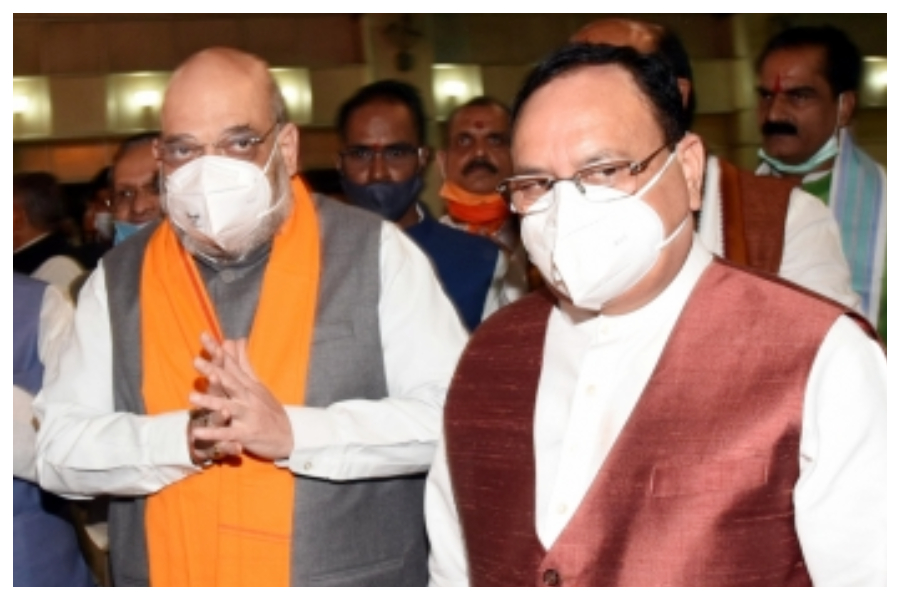 In a bid to woo voters from the Jat community ahead of the Assembly elections in Uttar Pradesh, Union Home Minister Amit Shah on Wednesday met Jat leaders and said that his relationship with the community goes back a long time.

Shah interacted with over 200 leaders from the Jat community in the national capital.

He said that both the BJP and the Jat community have similar views on important issues.

Describing Samajwadi Party leader Akhilesh Yadav as an outsider, Shah asked the Jat leaders “why do you bring outsiders in a fight within the house?”

Taking a note of the soft corner among the Jats for RLD leader Jayant Chaudhary, Shah said, “Jayant has chosen the wrong house this time.”

Expressing gratitude to the Jat voters for always supporting the BJP, the Home Minister claimed that no one, except Prime Minister Narendra Modi, gave respect to farmer leader Mahendra Singh Tikait.

During the meeting, issues related to the situation in western Uttar Pradesh before 2017, Muzaffarnagar riots during the Akhilesh Yadav-led Samajwadi Party government, the grand Ram Temple being built in Ayodhya during the Modi-Yogi government and Jat reservation were also discussed.

Talking to the media after the meeting, Union minister and Lok Sabha MP from Muzaffarnagar, Sanjeev Balyan, said that the Jat community has always supported the BJP.

Some people also raised the issue of Jat reservation, to which the Home Minister said that it is also in his mind.

Balyan also claimed that no one in western Uttar Pradesh wants Akhilesh Yadav to be the next Chief Minister of Uttar Pradesh.