Aadar Jain says he does not feel the pressure to deliver in the same way that his maternal grandfather, the legendary Raj Kapoor, did. He is also upbeat about his upcoming comedy “Hello Charlie”, adding that rumoured girlfriend Tara Sutaria says it is one of her favourites.

“I have a responsibility towards my work but I don’t feel any pressure that I have to achieve so much or I have to deliver in some way that my grandfather probably did in his films, the kinds of films that he made or whatever. There is no pressure from my family or my parents’ side. The fact that I exist in this industry and do what I love, which is acting in Hindi cinema, I think in itself is something that my family takes a lot of pride in,” Aadar told IANS.

Aadar made his Bollywood debut with Habib Faisal’s 2017 film ‘Qaidi Band’. The film failed to leave a mark, and his next screen appearance is the upcoming digital film “Hello Charlie”, slated to release on April 9.

Why this gap between the two films? “My first film came out in 2017 and then in 2018 I met (Hello Charlie producer) Ritesh (Sidhwani) sir and (director) Pankaj (Saraswat) sir, and I auditioned. We started shooting in 2019 but because of this pandemic I feel there is an even bigger gap. 2020 just went by without you knowing. So it is not really in my hands that the film came out late,” he said.

In the film, Aadar plays Chirag Rastogi or Charlie, a simpleton hailing from a small town of Gujarat. Sharing his experience of shooting with a gorilla in the film, the actor said: “I had to learn how to be with a gorilla (Toto). I had to hang with it and chill with it. He had his handlers with him but I was scared. I am an animal lover and have been to many safaris in my life but to see an animal far away and to work with it up close and to be next to it is very scary.”

Aadar also opened up on rumoured girlfriend Tara Sutaria’s reaction after watching the film. He said: “She has seen the movie and she has really, really loved it. I think she spoke to Pankaj sir also and told him what she felt. She loved all the characters, (the film’s heroine) Shlokka Pandit, the script and the fact that it is so unique and one of a kind. She’s just saying already that it is one of her favourite movies!”

“Qaidi Band” and “Hello Charlie” are completely different kinds of films. What kind of genre would he like to take up next? “I have always said that I am a big fan of cinema as a whole and it includes all genres. So for me it’s not ‘pick and choose’. Both the films that I have done, have chosen them from my heart, what my gut has told me. Going forward I think I am only going to do films which I can connect to, whether it is the same genre, different genre, something very hatke (offbeat) or something serious, I don’t know but it has to come from within,” he replied.

“Hello Charlie” is slated to drop on Amazon Prime Video. 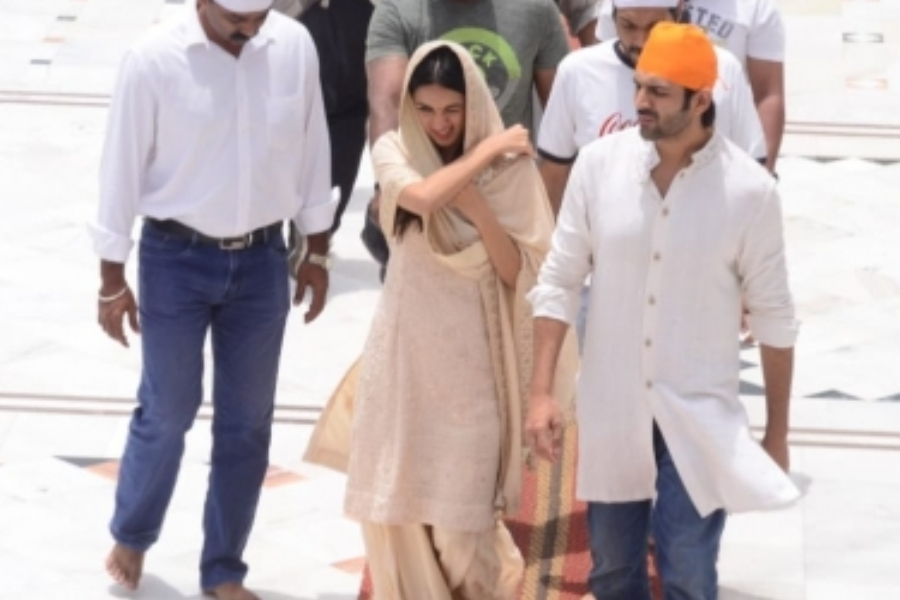 ‘Bhool Bhulaiyaa 2’ stars Kartik Aaryan and Kiara Advani, who are promoting their movie in full swing, visited the Gurudwara Bangla Sahib in Delhi to seek blessings ahead of the film’s release.

The actors were seen in ethnic wear while they visited the holy place.

While Kiara looked elegant and beautiful in beige chicken suit, Kartik seemed perfect in white kurta with a kesari headscarf and jeans. Pictures and videos of the actors are going viral and grabbing the eyeballs.

Directed by Anees Bazmee, ‘Bhool Bhulaiyaa 2’ is all set for its release on May 20. 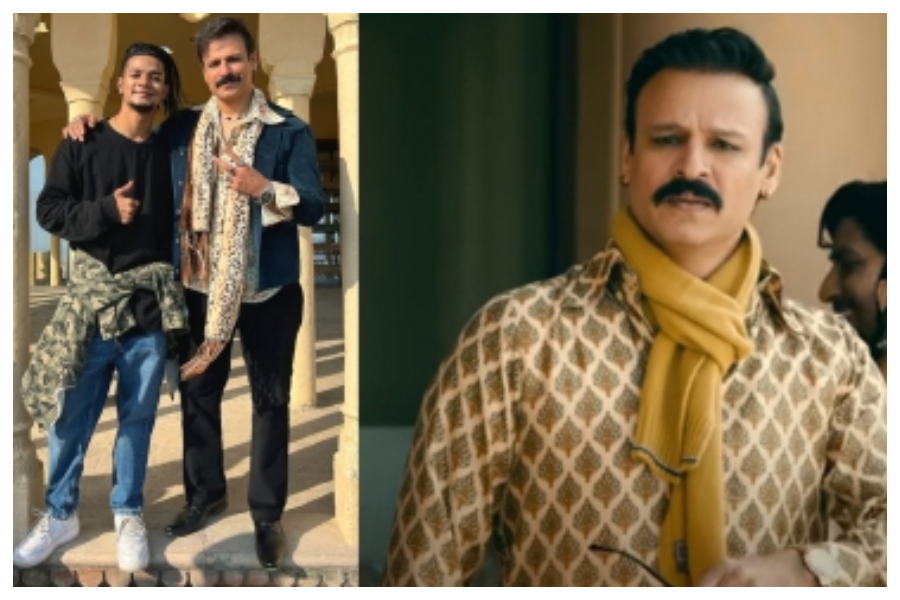 Choreographer-director Saurabh Prajapati’s latest track ‘Dhokebaaz’ has been doing well. He has choreographed the song and worked with Vivek Oberoi and Tridha Choudhury on it.

The song has already reached 2.9 crore views and counting, and the team is in a celebratory mood.

“‘Dhokebaaz’ getting great response for its audio and video is a humbling feeling. In fact, in both, it has already crossed 2.9 crore in a very short time. I’m happy that people are enjoying the track, many have told us that they listen to this song on loop.”

“‘Dhokebaaz’ is a different kind of song, even the choreography is different too. We have kept much of classical dancing, lavni or lavani etc for which one has to be professionally trained. It’s not just any other casual Bollywood number,” he says.

Tridha is getting a lot of appreciation and has been presented really well. Sharing his experience of working with her, he says: “Tridha worked really hard for this one, although she didn’t get enough time for prep. But, she pulled it off well.”

“I worked with her for every single detail when it came to her performance because there was so much storytelling through facial expressions and dance moves in ‘Dhokebaaz’. All in all, it was a great experience working with her. She is a good dancer and grabs things in very less time.”

Saurabh is happy that apart from music lovers, even people in the industry have liked the song and appreciated his work.

“Everyone gave me positive feedback. When I showed this video to my two personal favourites, Remo D’Souza sir and Terence Lewis sir, who are always honest with me when it comes to art no matter what, they both loved it too,” he says.

He concludes: “I want to tell everyone out there thank you from the bottom of my heart. I also want to share that I am working on a new song where a lot of Indian dance forms will be showcased. This is going to be out soon.” 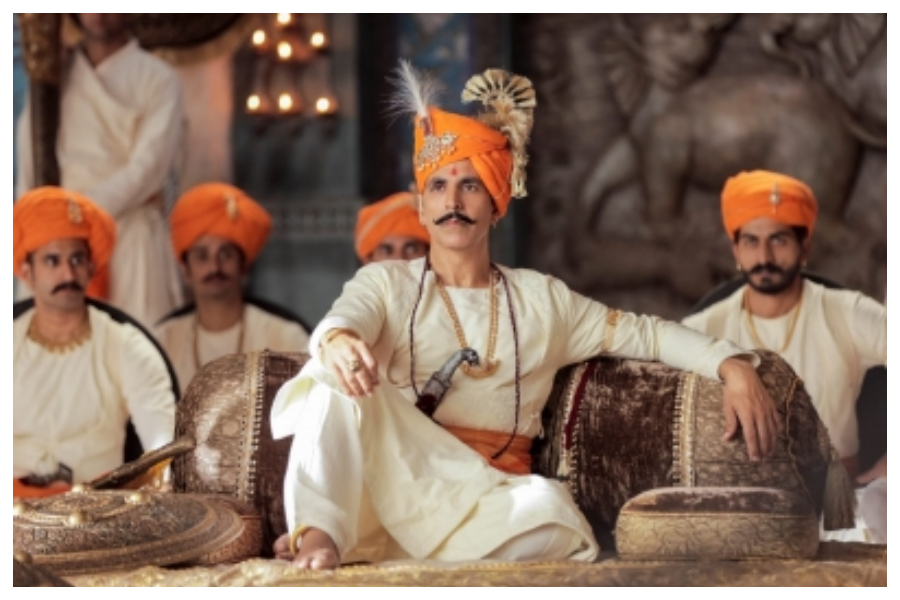 The makers of Akshay Kumar’s upcoming historical ‘Prithviraj’, which is based on the life and valour of Prithviraj Chauhan, had to create over 50,000 costumes and also used 500 different types of turbans during the shoot.

Akshay Kumar says, “Rarely do films take this much effort and embark upon such monumental tasks. Every element of our film which is based on the life of Samrat Prithviraj Chauhan has been dealt with utmost sincerity, authenticity and reverence.

“We have paid attention to the minutest details while making the film because we wanted this to be the most glorious retelling of Samrat Prithviraj’s life on the big screen,” he said.

The film’s director Chandraprakash Dwivedi says, “Detailing was key to making a film like ‘Prithviraj’. Like for example, 500 different turbans were created for the film. All these were authentic replication of the kinds of turbans worn by kings, masses, people of various professions at that time.

“We had an expert on turban styling on the set who would oversee the process of these turbans being worn by our actors,” he said.

He adds, “Over 50,000 costumes were handmade for the film by a costume designer who, along with his team, was specially flown in from Rajasthan to stay in Mumbai and make these costumes from scratch.

He feels glad that he had a producer like Aditya Chopra who believed in his vision for the film and backed him completely to tell a story like this in the grandest way possible.