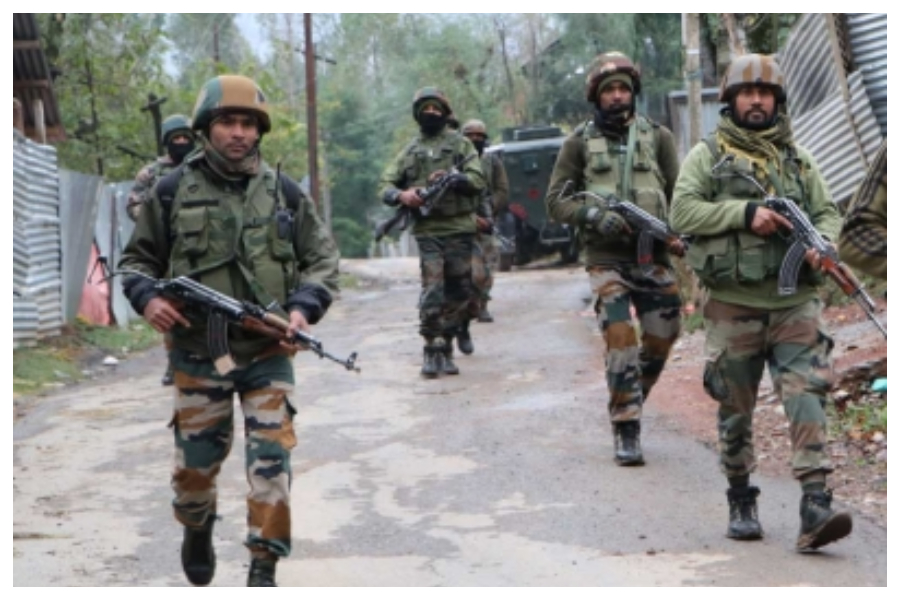 A policeman was injured in an encounter that started between terrorists and security forces in Jammu and Kashmir’s Anantnag district on Wednesday, officials said.

“Encounter has started at Nowgam Shahabad Dooru area of Anantnag. In the initial firing, one police personnel got injured and was shifted to hospital. Police and security forces are on the job,” police said.

The firefight between terrorists and security forces took place after a joint team of security forces cordoned off the area and launched a search operation on the basis of specific information about presence of terrorists. As they zeroed in on the spot where terrorists were hiding, they came under a heavy volume of fire and retaliated, triggering the encounter.

Kalicharan Maharaj arrested in Khajuraho over remarks against Mahatma Gandhi The Enforcement Directorate (ED) on Tuesday said journalist Rana Ayyub received money through a crowdfunding platform for the purpose of slum dwellers, Covid relief, and some work in Assam, however she diverted the money and used it for “personal enjoyment”.

Ayyub had moved the apex court against the summons issued by a Ghaziabad court in connection with a Prevention of Money Laundering Act (PMLA) case.

Advocate Vrinda Grover, representing Ayyub, contended before a bench of Justices V. Ramasubramanian and Justice J.B. Pardiwala, “can her client be deprived of personal liberty by a procedure not authorised by law?”

Grover said the ED has attached her client’s personal bank account in a bank at Navi Mumbai in which around Rs 1 crore was lying. She pressed that the Ghaziabad court has no jurisdiction to try the offence as the alleged act is claimed to have been committed in Mumbai.

Solicitor General Tushar Mehta, representing the ED, submitted that Ayyub raised funds of three aspects — slum dwellers, Covid, and for some work in Assam — on Ketto, which is a crowdfunding platform. He added that nearly Rs 1 crore was collected and Rs 50 Lakh was transferred to a personal account in fixed deposit, and after the first campaign was over she kept receiving money. “We found that money was diverted…used for personal enjoyment…people were donating crores without knowing where money was going…,” said Mehta.

He further submitted that a prosecution complaint was filed in the Ghaziabad court by the agency as part of the cause of action had arisen in Uttar Pradesh, where many people, including from Ghaziabad, donated money for her crowdfunding campaign.

Mehta said the money laundering offence is not an independent offence and is always connected to a scheduled offence for which an FIR was lodged in Indirapuram police station of Ghaziabad. He added that money was shown by fake bills, groceries, among others, and was used for personal luxury items and consumption.

Citing Ayyub’s counsel arguments, Mehta emphasized that if a person chose to launder money in Singapore or Thiruvananthapuram, the agency has to go there and lodge a case. He said, “this is not the scheme…”

After hearing arguments, the apex court reserved its verdict on a plea by Ayyub challenging the summonses issued by a special court in Ghaziabad in the money laundering case.

Last week, the apex court had asked the Ghaziabad court to adjourn the proceedings in the money laundering case against Ayyub scheduled for hearing on January 27 to a date after January 31.

The ED, in October last year, had filed a charge sheet against Ayyub, accusing her of cheating the public and utilising charity funds worth Rs 2.69 crore for creating her personal assets, and also violating the foreign contribution law.

Ayyub moved the apex court seeking quashing of the proceedings initiated by the ED in Ghaziabad. The plea contended that the alleged offence of money laundering occurred in Mumbai, while citing lack of jurisdiction.

A special PMLA court in Ghaziabad, in November last year, had taken cognizance of the prosecution complaint filed by the Enforcement Directorate and summoned Ayyub. The special court said that from the perusal of the entire record there is sufficient evidence as to a prima facie case for taking cognizance against Rana Ayyub with regard to commission of offence.

The special court has noted the alleged offence is connection with obtaining illegally money from the general public in the name of charity via ‘Ketto’ platform, which is an online crowdfunding platform, in three campaigns without any kind of approval, raising huge amounts in the bank account of her sister and father and later transferring the same to her own bank account which was not used for the intended purpose.