London: Australia’s Matthew Wade celebrates his century on Day 4 of the 5th Test match between England and Australia at Kennington Oval in London on Sep 15, 2019. (Photo: Twitter/@ICC)

Australia’s stand-in skipper Matthew Wade has said ahead of the opening T20 International against Bangladesh at the Sher-e-Bangla National Cricket Stadium later on Tuesday that it is an exciting prospect for him to “go back into the middle order” and that the task “doesn’t faze me too much”.

Australia will play a five-match T20I series against Bangladesh in the tune-up to the ICC T20 World Cup later this year in the UAE and Oman.

“To go back into the middle order is a challenge I’m excited to do. It doesn’t faze me too much, whatever needs to be done. Then once the (T20) World Cup comes around, whether that means I go back up the top or stay in the middle order, we aren’t 100 per cent sure. The way Mitch (Mitchell Marsh) has come out and played at No. 3 that’s certainly another option for us at the top.”

The fringe players in the Australian team will have an opportunity to make a case for themselves in the T20 World Cup squad when they face Bangladesh in the series.

Australia are without several key players, including David Warner, Pat Cummins, Glenn Maxwell, Marcus Stoinis, Jhye Richardson and Kane Richardson, all of whom opted out of the tour while Steve Smith and Aaron Finch are nursing injuries.

Wade will be hoping that the team can bounce back after the 4-1 loss to the West Indies in the T20I series last month.

Bangladesh, meanwhile, come into the series on the back of a 2-1 T20I series win over Zimbabwe. With Mushfiqur Rahim, Liton Das and Tamim Iqbal missing the series, the onus will be on experienced campaigners such as Shakib Al Hasan, Mahmudullah and Soumya Sarkar to lead the way against Australia.

The last time they played, Australia beat Bangladesh by three wickets when they faced off in the Super 10 stages of the ICC T20 World Cup 2016 in Bangalore.

Batting first, the Bangladesh batsmen faltered early, losing both Soumya Sarkar and Sabbir Rahman in the power-play. Mohammad Mithun and Shakib steadied the ship with a 37-run stand before Australia’s bowlers pegged the batting line-up back.

A late flurry from Mahmudullah and Mushfiqur Rahim took Bangladesh to 156/5. Adam Zampa was the pick of the bowlers with 3/23 in four overs.

The Australian openers Usman Khawaja and Shane Watson put up a 62-run stand and it looked like they would cruise to victory at that stage. Australia were 95/1 in 11.2 overs at one stage, but then almost threw it away after sliding to 135/5. Maxwell’s 15-ball 26 proved to be crucial in the end as Australia got across the line with nine balls to spare. 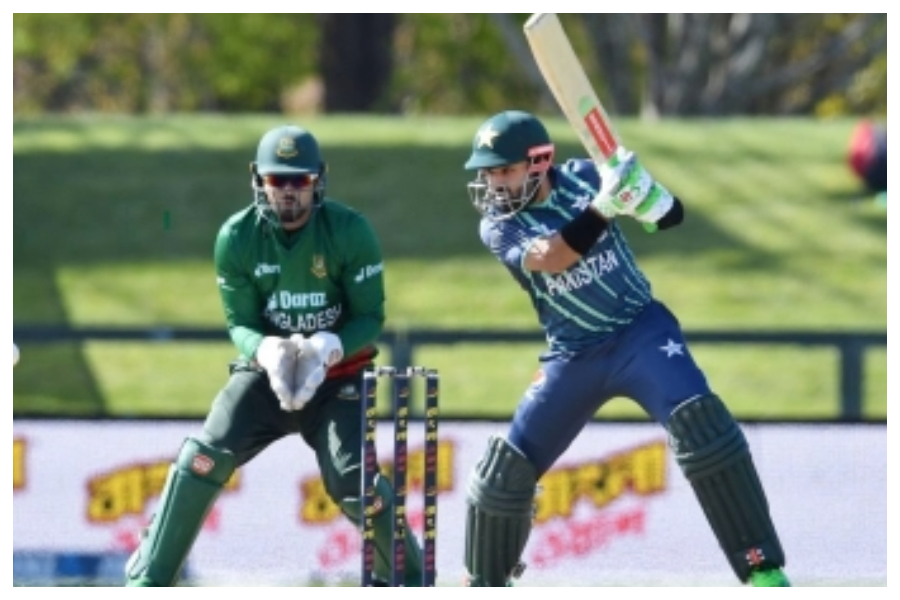 Wicket-keeper Mohammad Rizwan scored an unbeaten 78 and carried his bat throughout the innings as Pakistan kick-started their campaign in the tri-series in New Zealand with a 21-run win over Bangladesh at the Hagley Oval on Friday.

Pushed into batting first, Rizwan and captain Babar Azam (22 off 25 balls) added 52 runs for the first wicket in 7.1 overs. The ever-consistent opener, who hit his sixth half-century in last eight T20I innings, then added 42 more runs with Shan Masood, who made 31 off 22 deliveries.

Shan Masood (31 off 22) was Pakistan’s other key contributor, as Haider Ali, Iftikhar Ahmed and Asif Ali couldn’t contribute much to reduce the tension around Pakistan’s fragile middle order. Despite this, Pakistan managed to score 51 runs off the last four overs to post a competitive total against Bangladesh, playing without talismanic all-rounder Shakib Al Hasan.

In defence of their total, Pakistan pacers were too hot to handle for the Bangladesh openers in the first six overs. Wasim struck in the fifth over as he dismissed Mehidy Hasan Miraz for 10. In the next over, Sabbir Rahman fell for 14 after a simple caught and bowled dismissal off Haris Rauf.

Litton Das made 35 off 26 balls before Nawaz dismissed him and Mosaddek Hossain on successive deliveries in the 13th over. Afif Hossain made 25 off 23 balls while Yasir Ali top-scored for Bangladesh with 42 not out off 21 balls, hitting five fours and two sixes.

After dismissing Taskin Ahmed and Nasum Ahmed on the first two balls of the penultimate over, Wasim finished with impressive figures of 3/24 while Nawaz returned with figures of 2/25 in a collective bowling performance for Pakistan where all bowlers kept their economy rate below 10 despite a 20-run final over.

Pakistan will be next seen in action when they take on hosts New Zealand tomorrow in the second match of the tri-series. 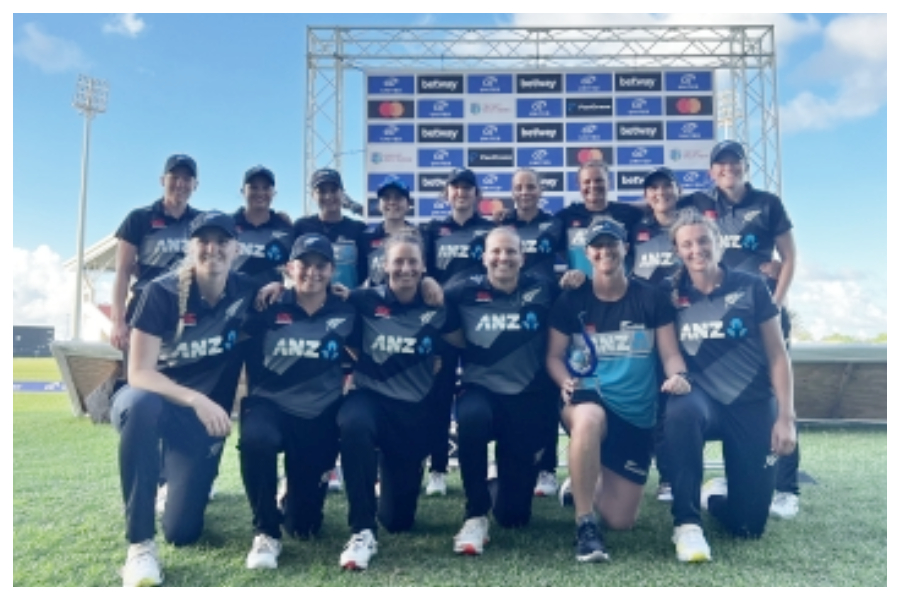 West Indies captain Hayley Matthews’ 56 went in vain as Maddy Green hit an unbeaten 32 to take New Zealand to a five-wicket victory in the final T20I at the Sir Vivian Richards Stadium and clinch the five-match series 4-1.

After Fran Jonas (2/8), Eden Carson (2/17) and Suzie Bates (3/10) restricted West Indies to 101/8 in 20 overs, Maddy led the charge for New Zealand in chasing the score on the last ball of the innings and end the tour on a high by bagging the Player of the Match award.

Electing to field first, New Zealand struck early, with Fran removing opener Aaliyah Alleyne for six in the fifth over of the innings. From there on, the hosts were unable to get going as barring Hayley, who got her sixth T20I fifty, none of the batters touched the double-digit mark.

It meant that Hayley had to do the bulk of scoring, hitting three fours and four sixes to take the team past 100. However, with no support from the other end, the team could make just 101.

While Fran would take out Hayley in the 17th over, Eden took out Rashada Williams and Chedean Nation. Suzie was the pick of the bowlers for New Zealand, dismissing Natasha McLean, Shabika Gajnabi and Afy Fletcher. Bates returned figures of 3 for 10 from her three overs.

In the chase, New Zealand lost Suzie (13) and Brooke Halliday (1) inside first eight overs. But Sophie Devine (23) and Amelia Kerr (25) steadied the ship for New Zealand. After the duo fell, Maddy took the charge of taking the team home with an unbeaten 32 off 29 balls, hitting two fours and scored the winning run as well on the final ball of the chase.

For West Indies, Afy, Shabika and Sheneta Grimmond scalped a wicket apiece. The win also marked the successful culmination of New Zealand’s tour of West Indies, where the visitors had won ODI series 2-1 and took T20I series as well. 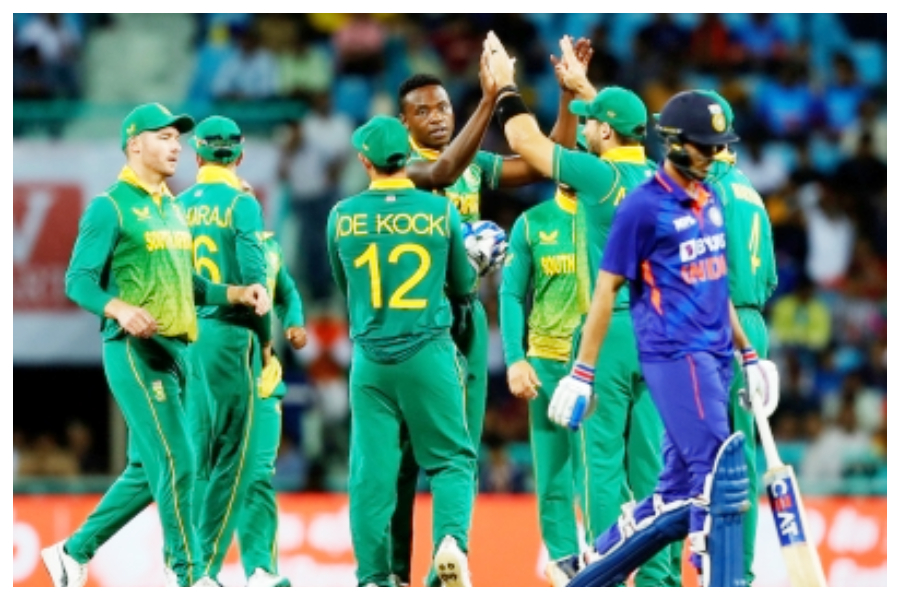 South Africa, despite defeating Indian in the opening One-day International here on Thursday, are languishing at 11th position in the ICC Men’s Cricket World Cup Super League Standings — a position which will not earn them automatic qualification in next year’s 50-over World Cup in India.

In fact, even if they make a clean sweep of the three-match series here and also win the ODIs against England at home and the two games remaining from their suspended home series against the Netherlands, it is unlikely they will be able to automatically qualify for the showpiece event.

India are currently sixth in the Super League standings. Only Zimbabwe (12th) and Netherlands (13th) are below South Africa in the standings.

The Proteas, before the start of the ongoing series against India, were languishing at 11th place with just four wins in 13 matches. A total of 13 teams are ranked in the Cricket World Cup Super League Standings — 12 Full Member nations, along with the Netherlands — and the bottom-five teams, after the two-year Super League qualification period, will play a qualifying tournament, which will also feature the best teams from the lower rungs of competition.

When the Proteas forfeited the ODI series against Australia in January next year, reportedly due to their much-hyped franchise-based inaugural SA20 tournament at home, they had to give away all 30 ODI World Cup Super League points that were on offer, according to ICC.

Since then, they have levelled the series against England in England (1-1), but it hasn’t made their position in the standings any better.

Put in to bat first in Lucknow in a 40-overs game, South Africa were reduced to 71/3 with India striking two quick blows. The wicket of Quinton de Kock further dented the visitors, but the tables turned when Heinrich Klaasen and David Miller came thogether at the crease.

The two put on an unbeaten 139-run stand in 17.4 overs to take South Africa to 249 in 40 overs. Klaasen remained unbeaten on 74 off 65 balls while Miller, carrying forward his fine recent form, finished on a 63-ball 75 not out.

South Africa pushed their advantage further with the new ball as Kagiso Rabada and Wayne Parnell sent back the India openers inside the first six overs. Keshav Maharaj then spun a web over India batters with the pitch taking turn and India were reduced to 51/4.

Shreyas Iyer and Sanju Samson resurrected the innings with a half-century stand, but Iyer was dismissed in the 27th over to give South Africa the upper hand. Despite late fireworks from the Samson-Thakur pair, India finished short and South Africa earned some much-needed Super League points.