Simultaneously, the Leader of Opposition Devendra Fadnavis said that the party stands solidly behind Rane and accused the Maha Vikas Aghadi government of ‘misusing’ the police to target the BJP leaders.

Addressing the media, he said that the party does not endorse Rane’s comment threatening to ‘slap’ the CM, but also would not tolerate any attempts by the MVA government to slap ‘cognisable offences’ against the Union Minister.

“The statements may attract non-cognisable charges, but they are illegally trying to make it ‘cognisable’ and police teams have been despatched to act against Rane. This will not stand in the courts,” Fadnavis asserted.

He further said that if Rane is arrested, the ongoing ‘Jan Ashirwad Yatra’ will not be halted and it would be continued forward by others like Leader of Opposition (Council) Pravin Darekar, Ashish Shelar, etc.

“The government is taking prompt steps against Rane. But they did not show such speed to act vis-a-vis Sharjeel Usman who abused Bharat Mata and Hindutva in Maharashtra. The (MVA) has no courage” Fadnavis said.

The reference was to the Aligarh Muslim University student and anti-CAA activist who is facing a case under Pune Police for his statements on January 30 this year at an Elgar Parishad meeting.

Fadnavis’ comments came amid an all out agitation triggered by Rane’s statement of Monday night, with Shiv Sena and BJP activists coming in direct confrontation and police resorting to mild caning to control them.

Responding to Sena challenges that he would not be allowed to step out of Chiplun around in his Yatra, Rane dared anybody to come and stop him from moving around in his processions.

“They can do nothing. If they have the guts, ask them to come and see me. I am still going around freely, no?” Rane retorted sharply.

Sena activists agitated by stone-pelting or vandalism at BJP offices, a mall allegedly linked with Rane in Pune, road blocks, tearing off BJP banners or hoardings, burning his effigies, carrying hens and beating his photos with shoes, sit-ins, a letter to the Prime Minister asking him to sack him, and offers to ‘bear the full cost of mental treatment’ for Rane at the Thane Mental Asylum.

Fadnavis issued a veiled warning that if the BJP offices were targeted and the police remained mute spectators, there would be repercussions as the BJP activists are also street-fighters who are fully capable of protecting themselves, but urged for restraint.

BJP state President Chandrakant Patil distanced himself from Rane’s comments, while Republican Party of India (A) President and Union MoS Ramdas Athawale pointed out that “Rane is a product of Shiv Sena and spoke the language they understand”. 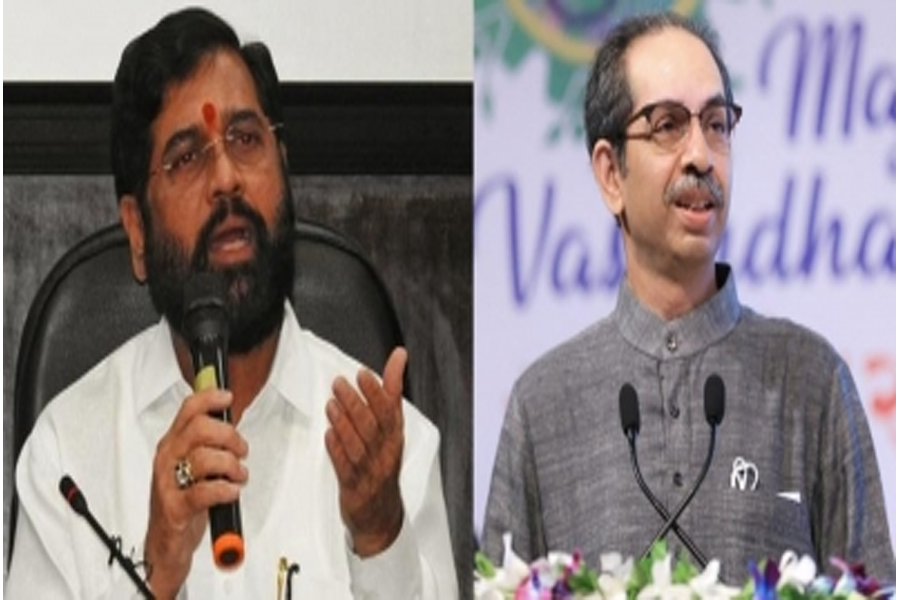 In a big setback to Uddhav Thackeray’s faction, the Supreme Court on Tuesday declined to stop the Election Commission from deciding the claim of Eknath Shinde group to be the real Shiv Sena.

After a day-long hearing, a constitution bench headed by Justice D.Y. Chandrachud dismissed the interlocutory application filed on behalf of Thackeray’s faction. The apex court’s decision is very significant in view of the impending Brihanmumbai Municipal Corporation elections, where both Shinde and Thackeray factions would like to contest the poll.

The bench — also comprising Justices M.R. Shah, Krishna Murari, Hima Kohli, and P.S. Narasimha — said there would not be any stay on the proceedings before the Election Commission on intra party dispute and ‘bow and arrow’ symbol of the party. “We direct that there would be no stay of the proceedings before the Election Commission of India,” it said.

Senior advocates Kapil Sibal, A.M. Singhvi and Devadatt Kamat represented the Thackeray’s faction. Sibal submitted that Shinde cannot approach the EC once he has incurred disqualification, saying “I challenged the very locus of the person who moved the EC”.

Sibal clarified that Shinde has incurred disqualification as his various acts amounted to “voluntarily giving up membership of the party” under the Tenth Schedule, and he also violated the party whip, which is also covered by the Tenth Schedule.

The Thackeray camp vociferously argued that since disqualification of Shinde and the MLAs supporting him was pending, therefore EC cannot consider their application over the party and the symbol. However, the top court declined to entertain this contention.

Shinde’s faction counsel argued that under Article 324 of the Constitution, the EC possesses plenty of powers to deal with any situation which arises in relation to political parties and several party members have sent their representations to the EC supporting the Shinde group.

Kaul submitted that the nature of enquiry under Tenth Schedule and the Symbols Order are different.

Shinde’s faction counsel claimed a hopeless minority sought to remove him from the party, and contended that the Speaker, under the Tenth Schedule, has to exercise power to determine disqualification of a member and he cannot decide on the split or merger within a political party. Shinde faction counsel vehemently argued that a party member’s right to move the EC cannot be taken away.

The EC counsel argued that it worked independently, and its functions are different when compared with the Speaker. The counsel added that it can decide who held the majority in the party.

Shinde and his faction had rebelled against Thackeray, which forced him to resign as Maharashtra Chief Minister.

Shiv Sena’s General Secretary Subhash Desai had moved the apex court saying that Shinde and other MLAs, have purportedly initiated proceedings under para 15 of the Election Symbols (Reservation and Allotment) Order, 1968 (Symbols Order) seeking to be recognised as the “real Shiv Sena” by the EC. Desai added that they are also claiming the right to use the election symbol of “bow and arrow” allotted to Shiv Sena.

Thackeray faction claimed that since the disqualification matter is pending in the apex court, Shinde faction are trying to illegally cobble up numbers and fabricate an artificial majority in the organisation.

The apex court, on July 11, asked the newly appointed Maharashtra Assembly Speaker not to go ahead with proceedings on the disqualification petitions. 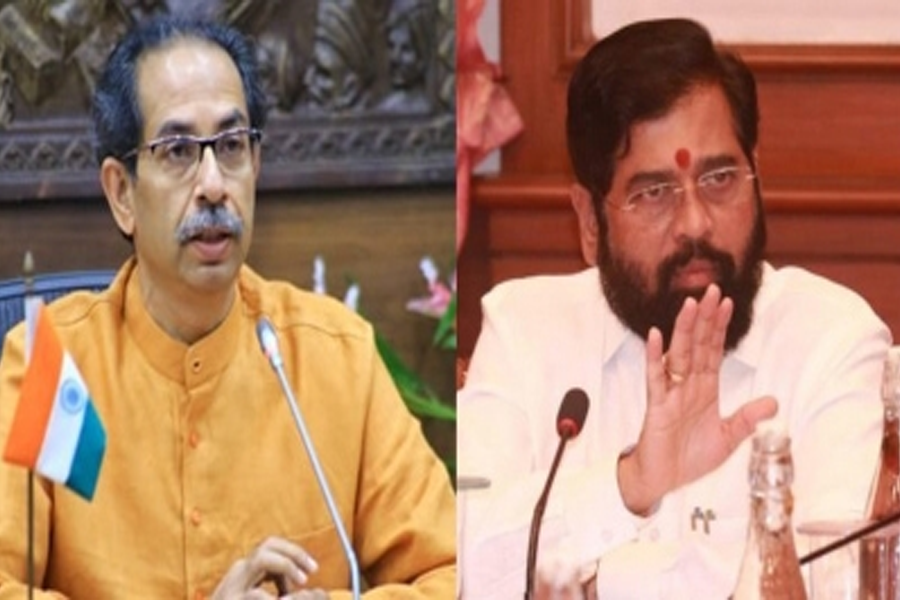 Both Shiv Sena factions – led by ex-CM Uddhav Thackeray and Chief Minister Eknath Shinde – welcomed the Supreme Court decision on Tuesday allowing the Election Commission to decide on the ‘real Shiv Sena’ and the allotment of the iconic bow-and-arrow symbol.

In his first reaction, Shinde said he humbly welcomed the apex court decision and reiterated that his faction is the “real Shiv Sena”.

“In a democracy, the majority counts and we have that majority in the assembly, a majority of the MPs are supporting us. All decisions taken in the country are based on the Constitution, laws and procedures. We have not done anything to flout any laws and we have formed this government also on the basis of the laws. We were expecting this decision,” he said.

Shiv Sena ex-Minister Aditya Thackeray said that “this is not a relief” as claimed by the Shinde group leaders, while MP Arvind Sawant said that this decision is part of the legal procedures, and the whole country has witnessed the court proceedings.

“This is neither a shock nor relief to any side. The SC has now asked the ECI to take a decision in the matter. The ‘traitors’ have not got any victory as they are claiming. Now we shall present our case before the ECI. We have full faith in the judiciary,” said Thackeray Jr.

Terming it as “the first blow to Uddhav Thackeray” with more to come, Shinde said that they had full faith in the EC, even as several other leaders his Group hailed verdict rejecting the Sena’s plea for a stay on the ECI on the rival group’s claims before it.

Nationalist Congress Party state President Jayant Patil, Sena leaders like Anil Desai, ex-Minister Anil Parab and others also said that they accept the SC verdict and will now present their case strongly before the EC.